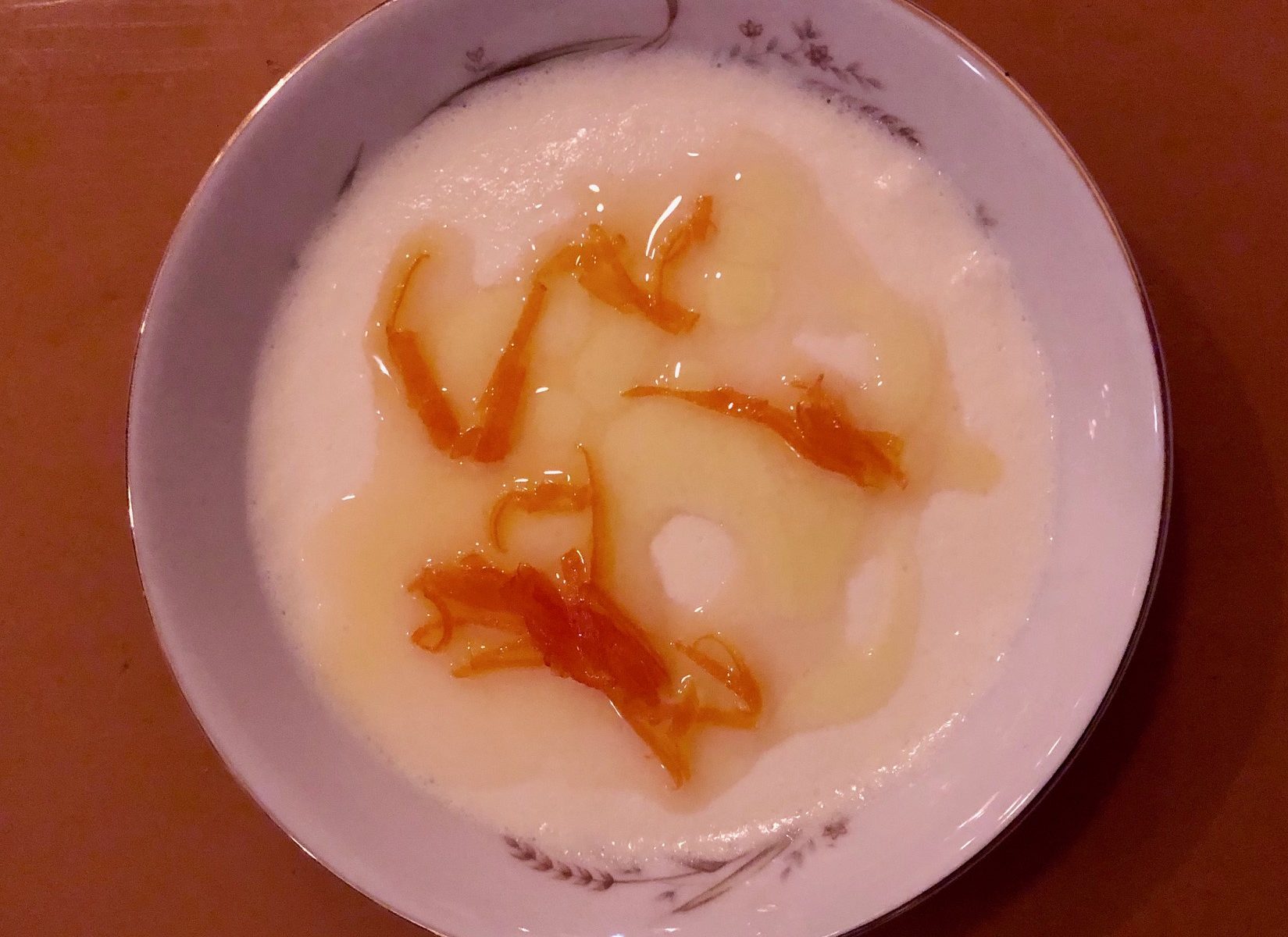 The Junction Triangle’s new restaurant, Donna’s, is situated on a sleepy stretch of Lansdowne Avenue in the former Hello Darling space. Contrary to what one might think, the restaurant’s name has no personal connection, but if Donna were real, her M.O. would be no frills. Serving both lunch and dinner, Donna’s has a range of dishes like soups, sandwiches, salads, cured meats and cheeses, and pastries. Co-owners Peter Jensen, Jed Smith, and Ann Kim, who worked at Momofuku Shōtō, are the people behind Donna’s. Just shy of six months old, it recently made a name for itself as one of Toronto’s best new restaurants.

Leading up to my Saturday night dinner reservation, communication from the restaurant was impressive. With no online booking platform on its website, patrons must email or phone the restaurant in advance. Kim, who manages front-of-house affairs, was polite and efficient in our few email exchanges. I even received a personal reminder, which was a welcome change from an automated text or email.

The layout was open and bright, with a main dining area at the front and communal tables at the back, which provided a front-row view of the open kitchen. A large bar, displaying several organic wines and drinks was off to the side. Much like its predecessor, Hello Darling, Donna’s décor was more shabby chic than refined. Forget about shiny new place settings and sparkling cutlery — mismatched kitsch was the name of the game at Donna’s. It had mom-and-pop type vibes. A dozen pendant lights were suspended from the ceiling, random repainted furniture and cracked linoleum floors were all part of l’atmosphère. But, it’s the type of space that can get away with some grunge. It felt like Kim, Jensen and Smith raided Value Village, slapped some fresh paint on the walls, and opened Donna’s just as the paint was drying. Some attention to detail would have benefitted, as the banquette seating was higher than my guest’s chair — by a long shot. Tabletop candles created a hygge vibe, but the overhead lighting could have been dimmer during dinner hours to create a more relaxed ambiance.

That said, we certainly had no issues reading the menu. Wines outnumbered the food selection, and there wasn’t one from the New World. Only six varieties were available by the glass, in stingy five-ounce pours. Cocktails and beers were limited, with only ten selections between them. Contrary to the wine list, beers were all local with selections from Burdock, Blood Brothers and Godspeed. I had a glass of Chenin Blanc, and my guest cracked open a craft brew from Godspeed.

Donna’s is devoted to simplicity, which is reflected in an overly edited, one-page menu (no, it’s not double-sided). Eight dishes — ranging from magic chili with peanuts ($5) to ham hock terrine ($15) are available before 6 p.m. After the clock strikes six, la cuisinecan prepare seven additional entrée-style dishes.

The use of less common ingredients, such as kohlrabi and persimmon, lured me in. It wasn’t difficult to select dishes from the petitmenu with only 13 in total — I was definitely craving a bit more variety. For a restaurant that had just opened its doors, I found our hipster server quite aloof. He was agreeable when it came to offering suggestions, but never cracked a smile or made us feel bienvenus. Despite the neighbourhood joint that Donna’s claims to be, it didn’t translate in the service.

My guest and I ordered Kirkham’s Lancashire cheese with carrot chutney ($15) from the snack portion of the menu. For entrees, we opted for the kohlrabi ($12) braised duck ($22), and sole on the bone ($35).

The Lancashire cheese arrived just as I’d pictured: sliced on a plate with a delicate mound of carrot chutney, some Carr’s water crackers and buttery crisps. Mon élément préféréwas how all three parts worked together, creating a symphony dans ma bouche. The cheese’s delicate texture and rich, creamy flavor paired well with the slightly sweet chutney. If Donna wasn’t just a fictional femme, I could picture her serving this. I would have liked to see a larger serving of chutney and crackers for the price point as the plate felt a little bare.

Points for originality on the next dish. The baked kohlrabi and rarebit sauce was like an upgraded mac and cheese sans the carbohydrate hangover. Mild and less earthy than a turnip, the kohlrabi brought lightness to this dish. Who knew a cruciferous vegetable smothered in a boozy cheddar sauce could be so comforting?

Next up was a rather disappointing braised duck with olive and pine nuts. My guest and I were hoping to sink our teeth into something flavorful and satiating — especially at a $22-dollar price point. Unfortunately, the broth that the braised meat floated in was quite the contrary — more than a shake of salt was required to redeem this dish. On top of that, a disproportionate heap of curly-leaf parsley sat on top of the meat, almost acting as a thoughtless space-filler, and detracted from the overall flavor. I did, however, enjoy the sporadic bite of duck that included a toasted pine nut.

As we grew hungrier, we dreamed of the sole on the bone being placed before us. We waited. And waited. And waited. No one came to check in, refill our water or ask if we wanted un autre verre du vin. At that point, I would have gladly obliged. Finalement, our server came over and asked if we needed anything else and we explained that we were waiting on the sole. His distant expression said it all: he had forgotten. Instead of ordering the sole at that point and having to wait another fortnight to pass, we opted to remove it from the bill.

Next up, a panna cotta ($8) and citrusy aperitif appeared as a “We F-ed up” sort of gesture. What confused us most about this token of apology was that the table beside us ordered that panna cotta fifteen minutes prior, and were told that it was sold out. One bite in, I concluded that the panna cotta wasn’t anything noteworthy. Honey, vinegar and some orange zest popped on the stark white surface, but the taste failed to “wow” me.

I had higher hopes for Donna’s, especially because of the experienced, passionate team behind it. With mediocre service, food that was equally blah and a dismal atmosphere, I’d rather return to one of my tried-and-trues. Bottom line: if Donna were real, she wouldn’t be proud.