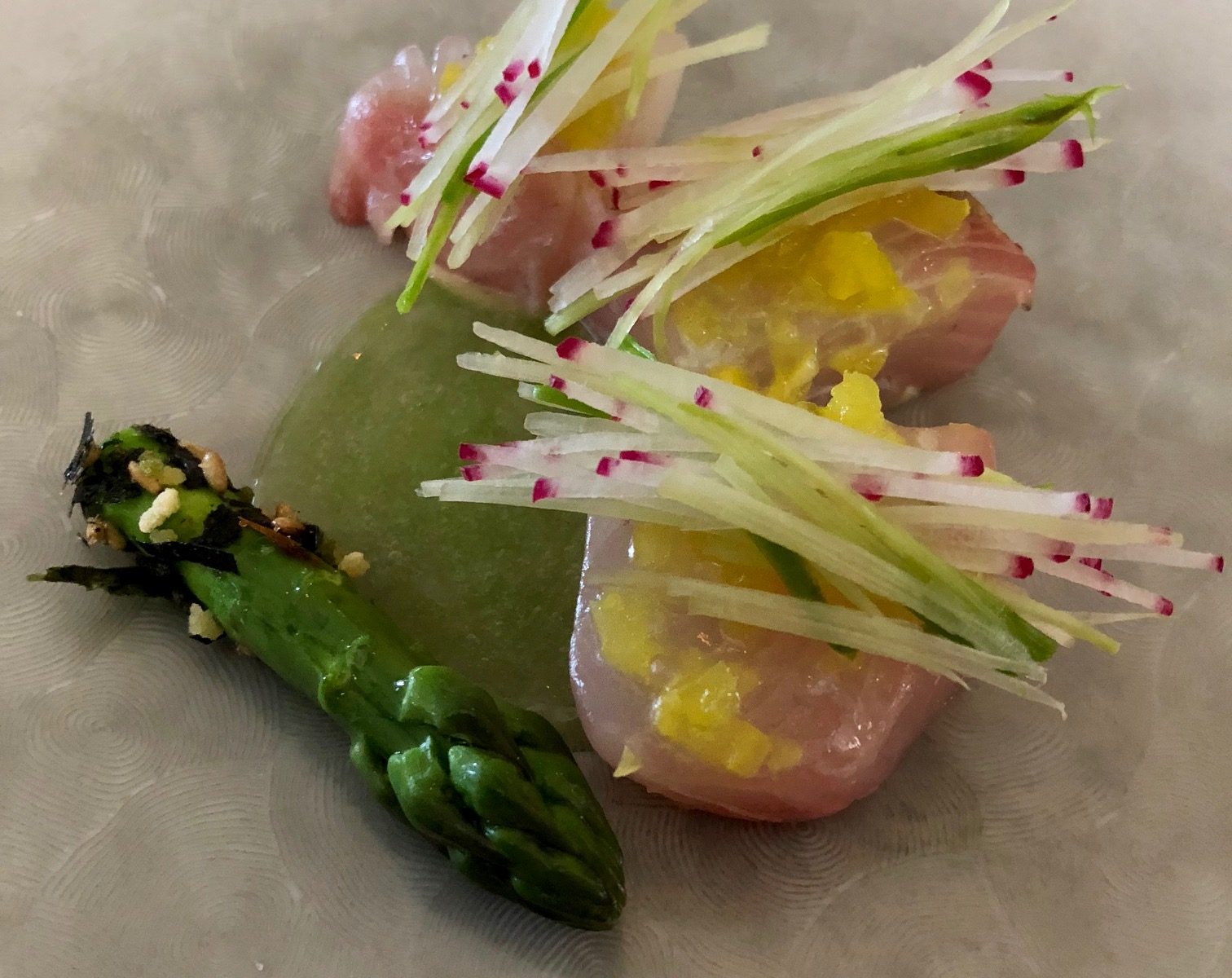 When you’re fortunate enough to secure a reservation at Alo, it’s something you look forward to for months. Alo was established in 2015. Since then, it’s captured the attention of gourmands all over the world. In June 2018, it was named as one of the top restaurants in the world.

Confession: I’ve been a fan of Chef Patrick Kriss since the early days. My first Alo experience shortly after it opened left me speechless. The food, service and ambiance were all worthy of not one, but three Michelin stars. And the same level of consistency, detail and perfection did not disappoint when I returned in November 2017. So, for my third time visiting Alo earlier this month, the bar was set high.

The small restaurant is tucked away on the third floor of a Victorian-style heritage building at the bustling intersection of Queen and Spadina. Before its sister restaurant, Aloette, opened, Alo’s discreet sign was the only indication of its innocuous ground-level entrance. When my guest and I entered, the hostess knew who we were. The crammed elevator ride to the third floor was part of the charm. Then, when the doors opened onto the third level, we were swept away into an epicurean Elysium.

We were led past the bar and kitchen to the best seat in the house — a tufted corner banquette that was spacious for our two dérrières, and provided an impeccable view of the open kitchen.

Alo is known exclusively for its tasting menu, consisting of 10 blind courses that change with the seasons. While the food is contemporary French, it draws inspiration from Japanese cuisine and is best complemented with a distinctive wine tasting that explores both familiar and little-known regions and producers. We left everything in Alo’s capable hands, and chéri, we were not disappointed!

Pour commencer, we sipped on a complimentary glass of Champagne and enjoyed the convivial and uplifting vibe that made us forget the hustle and bustle at street level. The amuse-bouches were served on a mirrored plate that reflected the contemporary light fixtures. The dainty bite-sized pastries were meticulously prepared and scrumptious. Mon amuse-bouche preferé had a layer of silky foie gras.

Then, the parade of dishes began. The black striped bass with perfectly circular accents of red plum, green apricots, and yuzu were placed before us as the server recited the ingredients masterfully, rolling off her tongue like she had a side gig au théâtre. On its own, the taste was complex, with a variety of textures and flavours. But it was elevated by the wine pairing, a 2015 Vinho Verde by Aphros Loureiro from Portugal.

Three delicate pieces of lime-marinated Kampachi with green asparagus and Furikake arrived next. Paired with a young Grüner Veltliner from Austria, the dish was a fabulous collision of flavours. The wine’s tingly aftertaste and citrus notes elevated the freshness of the dish.

I was highly entertained by one of the servers, Will, although regrettably, I asked him the source of the Kampachi and he drew a blank.

Other members of the team, however, knew their craft to the point where they anticipated my questions. Alo’s sommelier, Christopher, was a prime example. A born storyteller, he wasn’t the stuffy sommelier who thinks he’s a treat because he wears a pin on his lapel. He was relaxed, conversational and provided a whimsical wine tasting experience to complement Chef Patrick Kriss’ menu, encouraging patrons to step outside the bottle. There was nothing I wasn’t fond of, including a rosé from Languedoc that he paired with lobster and described, in relatable terms, as “not your typical picnic rosé.” We delighted in the perfectly poached east coast lobster, accented with sauce choron and shishito peppers that provided just the right amount of spice.

Seafood continued with the next course. Nothing says spring like fresh mussels from Prince Edward Island, and English peas that still had a fresh-from-the-pod crispness. Served shelled, the plump mussels were nestled in buttery, smoky Yukon gold potatoes. Typically, a wine aficionado would expect a crisp, zingy white with salty minerality, such as a Chablis, for this pairing. Instead, Christopher poured a Le Pezenas from Languedoc, a blend of Marsanne and Roussanne grapes that had a gorgeous honeysuckle edge.

Throughout our service, I observed Kriss and his team. Everyone was syncopated as they performed their tasks. Chef de cuisine, Nick Bentley, carefully reviewed chits and outgoing plates at the pass. No one missed a beat. And, every once in a while, Kriss would step away from his kitchen domain to survey the dining room. He studied diners’ facial expressions as flavour combinations flitted across their palates. It was clear he sought nothing more than to provoke a blissful expression in his patrons.

Proteins also got their turn to shine. The pan-roasted Muscovy duck breast played well against its turnip, tamarind and peanut topping. While the meat was cooked to perfection, I found the sinew juste un peu chewy. That didn’t stop me from finishing nearly all of it.

My stomach thanked me that there was still room for the 60-day aged beef ribeye with sugar snap peas and umami-rich morels. When my teeth sank into their spongy texture, they released the most magnificent earthy flavor, which they had imbibed from the pan jus. And le bifteck…magnifique! Paired with a Tuscan red, the bold and structured notes of which transported me to the Old World. The deep flavors of dark cherries and black stone fruit brought the savory, lean cut to life. Homemade bread and butter were also served with this course.

After a brief intermission with a pineapple, Armagnac and earl grey palate cleanser, we were ready for something sucré. Both desserts coaxed me to extend our three-hour seating window. Milk chocolate, buckwheat and raisin teamed up in a decadent ice cream, which was paired with an amber tawny port. Strawberries and vanilla arrived as a colourful last course — the epitome of a summer dessert that tasted heavenly alone and even better with the wine pairing. The glass of Clos Lapeyre Jurançon Moelleux offered a honeyed sweetness that balanced the acidity from the tartness of the calamansi lime in the dessert.

As we were finishing our meal, the manager came by, and I picked up on his anxious energy immediately. I realized that the clock was creeping close to our three-hour dining window. He asked if we would mind heading to the adjoining bar for a cocktail. We happily obliged and paid for our meal.

Kriss’ perfectionism was evident throughout the whole experience. Garnishes were plated with tweezers. Dishes were served at the same angle. Service was among the best in Toronto, with supreme attentiveness softened by warmth. A disciple of Daniel Boulud, Kriss incorporated his mentor’s techniques and aesthetic but also injected the right amount of personal style and finesse into the Alo menu.

The whole Alo team cares passionately about food and wine — it is clear it’s ingrained in each of them. The only request I’d politely make on future visits is a little more time.

I count Alo’s tasting menu amongst the most outstanding dining experiences I’ve had in the world. Some restaurants are truly unique in how they transform, and transcend, the culinary landscapes of their cities and countries. Alo is one of them.

Some more good news: Alo is extending its empire to Yorkville, with Alo Bar Yorkville set to open at 162 Cumberland Street this summer.