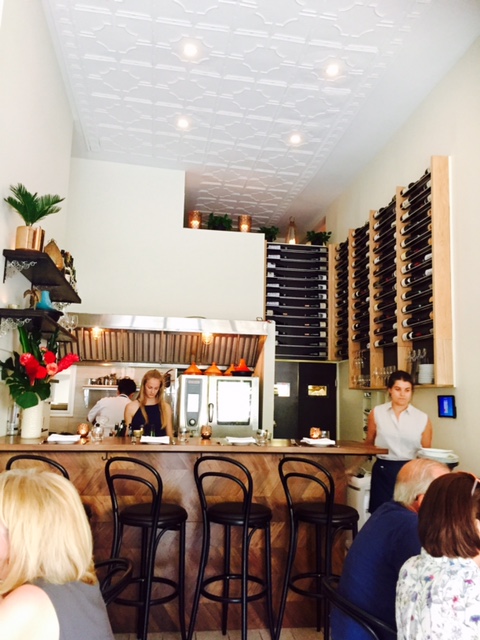 Atlas is Doug Penfold’s (Cava, Chabrol) newest restaurant that’s a culinary ode to his travels through Morocco. It was appropriately named after the 2,500 kilometre mountain range that stretches through Morocco, Algeria and Tunisia. The menu showcases the region’s diversity with everything from traditional tagines to keftas.

Penfold must have a penchant for small spaces, because Atlas, like Cava and Chabrol, is tucked away in tiny space off of Dupont Street, completely unmarked. I second-guessed myself before entering: I thought I was interrupting a private soirée. Walking in felt very welcoming, as if I was opening the door to a friend’s house. The high-ceiling space was bright and minimalist with decorative wood paneling and light fixtures accenting the room in all the right places. Wine bottles stacked up to the ceiling behind the bar doubled as an interesting art installation.

After a brief but exceptionally warm greeting from our server, Jerry, my guest and I agreed that he was made for this job. He was a born storyteller. He walked us through the menu as if we were guests in his home, sharing the details of how Penfold created each dish—to the point where my mouth was watering in anticipation. He explained that the roasted peppers and aubergines were charcoal grilled on an open flame out back. When my guest and I had our first bites of the eggplant zaalouk—a room-temperature dip made of eggplants, tomatoes, herbs and spices—we could taste the love that was poured into its creation. Jerry’s storytelling compensated for the generally subpar food.

Other highlights from the menu included the beet salad, a flavourful combination of roasted red beets and milky yogurt sprinkled with celery leaf and chives. I would return for this dish and the zaalouk alone. The sardine keftas smelled of dead fish that had washed up on the coast of Casablanca and the beef kefta was tough instead of tender.

North African cuisine is known for its soul-satisfying tagines—a slow-cooked stew featuring meat, vegetables and staple seasonings such as cumin, cinnamon, cayenne, saffron, ginger and paprika. Atlas’ two tagines—goat and whitefish—were served in jewel-toned earthenware pots and were a perfect sharable dish. Unfortunately, the fanfare of the presentation trumped the taste. The fish had a faint, under-seasoned flavour that begged for a shake of salt and a healthier dose of spices. What’s more, there was barely any leftover liquid in the pot to pour over our side of buttery quinoa. Perhaps the goat tagine was the standout…but I won’t be going back to try it. Quel dommage.

Penfold’s creativity shone when it came to the dessert menu. He married Moroccan ingredients with French elements. The lavender and sesame roulade of we shared was light and satisfying in the tagine’s wake. It was plated beautifully, showcasing the pastry chef’s skill with its perfect sesame cream swirl just begging to be tasted. The poached pears with blackberry purée that accompanied the cake were perfect accents.

Sweet and sticky apricots soaked in vanilla-saffron syrup came with the bill.

For me, Atlas wasn’t the peak of the mountain chain. It needed more editing, both in its food offerings and menu presentation (since when is “apricots” spelled “appricots?”). While this may seem like a miniscule error, it’s inexcusable for a restaurant of this calibre and should have been caught before printing. “The Jerry” was, by far, my favourite Atlas experience.