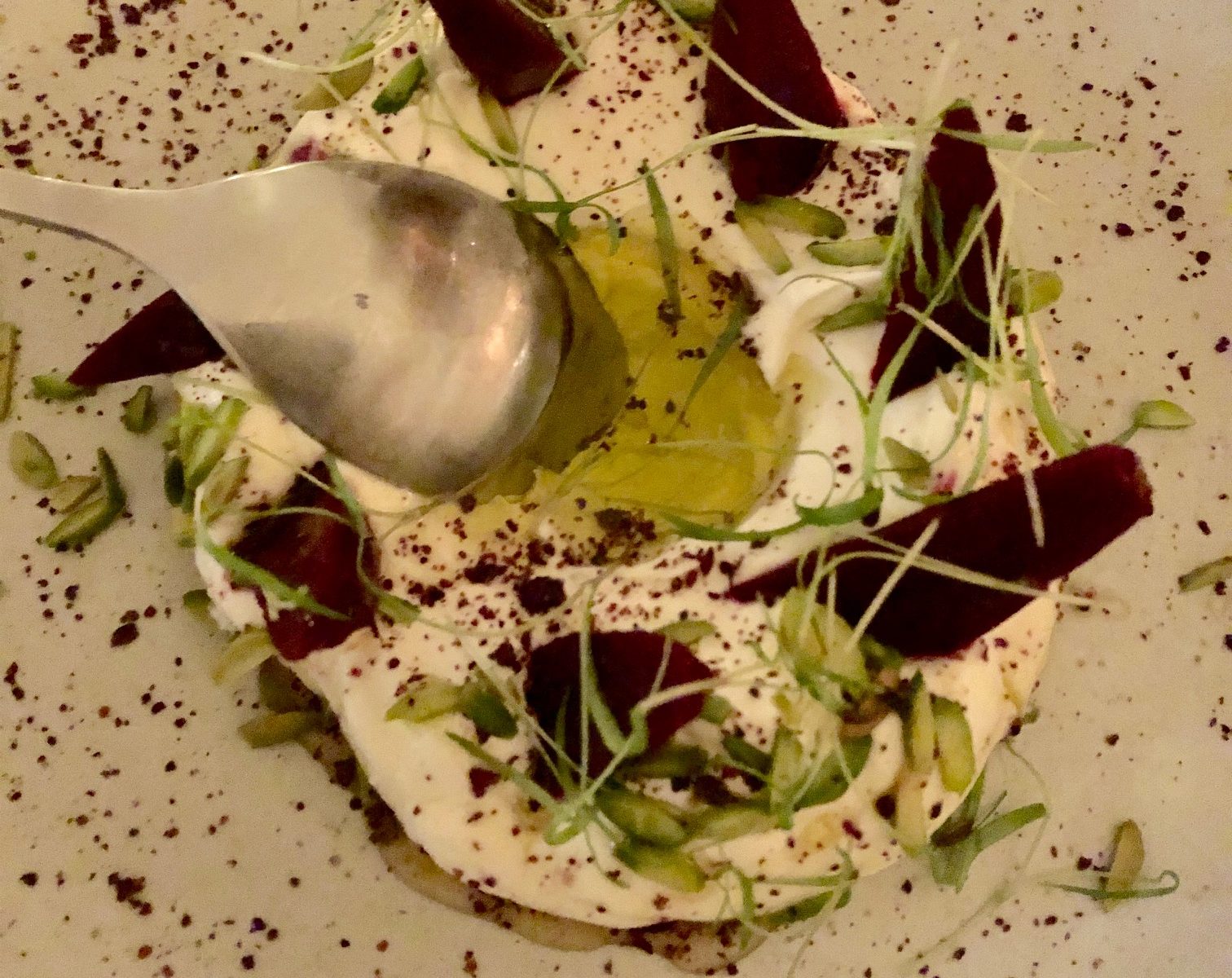 Byblos first opened its doors in the entertainment district in 2014, and still has a vibe that most restaurateurs envy. After two successful locations — one in downtown Toronto and one in Miami, Byblos has now expanded to another location at Yonge and Eglinton. Byblos Uptown took over the former North 44 space and opened in December 2018.

Like its sister restaurants, Byblos’ cuisine aims to bring lively eastern Mediterranean flavors to Toronto, with strong influences from both traditional and local ingredients. Having been to the downtown Toronto location multiple times, and always walking away très satisfaite, I was excited to venture north of Bloor Street to experience the coastal Mediterranean cuisine.

The Byblos chain is owned by Hanif Harji, CEO of ICONINK, and his partner Charles Khabouth, Chairman of the same international hospitality and lifestyle group. Similar to their other restaurants (Mira, KOST), they don’t cut corners when it comes to decor. The bright and sleek space made it feel like I was dining in Marrakech — a temporary (and welcome) respite from Toronto’s frigid winter.

As for the layout, it spanned two floors, with the dining area on the main level, and a bar and additional seating up top. What I liked about this location was the open and airy concept — complete with soaring ceilings. Dim lighting and mixed decor elements (gorgeous woven light fixtures, ancient rugs, plush earth-toned furniture, plate-paneled walls) contributed to its polished yet comfortable ambiance.

Walking into the restaurant on a Monday evening, Byblos had a pulse unlike most restaurants in the neighbourhood. Tables were full, and the vibe was convivial. And after experiencing the aroma from the kitchen, my stomach was thanking me for having made a reservation pour moi et mon amie.

At first glance, both the food and drink menus shared similarities to the other Byblos outposts. But, they didn’t fail to infuse some of the personality of its new ‘hood. Par exemple, the cocktail menu featured a boozy concoction called Uptown Girl, featuring house-made spirits. There were also new seafood dishes, such as the ras el hanout black cod ($36), a seared fillet laid over a rich buttery sauce with charred scallion, black olives and rose petals. Before we could dig in, we had a glass of bubbly.

The food menu, designed by executive chef Ben Heaton, drew influences from Morocco, Turkey, Israel and included a wide selection of sides, salads, appetizers, and wood-fired flatbreads that strive to impart a unique flavor. Sumac, za’tar, dukkah were spices of choice. Lamb and seafood were popular meats, and apparently, the lamb has a five-day process from kitchen to plate.

From the moment we walked in, we were treated like royalty. Coats were promptly checked, and we were escorted to our table with a prime view of the kitchen. Service was seamless under the general manager, who floated by to check in. Several staff had been plucked from both the downtown and the Miami locations to open Byblos Uptown — and it showed. They were knowledgeable and doting, but never intrusive.

Our exotic food adventure began with two dishes that our server suggested: eggplant kibbeh ($16) and roasted red beets ($14). A vegetarian delicacy, four asymmetrically-shaped kibbeh showed up in a dish that matched the overall décor. These savoury, deep-fried treats were served with zucchini flower, bahrat, and a house-made yogurt. Sinking my teeth through the golden chickpea batter and into the warm eggplant interior provided evidence that it had touched fire from the kitchen’s wood burning oven, like most other dishes. It was simply divine, and I only wished there had been encore plus.

Up next were the roasted red beets, beautifully presented on a ring of thick, tangy labneh — a strained yogurt with flecks of caraway and pistachio. Both the presentation and taste were exactement what I would expect. The accompanying barbari bread, a dense Persian flatbread, was delightful — spiked with a surprisingly sweet topping that had been applied a bit too généreusement. Byblos’ version of barbari was long and thin, as opposed to being shaped like a beaver tail. Although it was a brilliant pairing, the labneh and beets could have been consumed solo. I only wished there had been more beets to provide some earthy balance and textural variety to the dish.

The emblematic dish was by far the grilled whole branzino ($39). It arrived deboned and was plated by our server. A thick layer of vibrant chermoula sat on top of the fillet, its exotic arômewafting from the plate to my nostrils. Cooking on the grill allowed the flavours to seep into the fish’s flesh, contributing to the perfect first bite. This traditional chermoula was zapped with saffron toum (a Lebanese garlic sauce) and garnished with bitter watercress. Ma bouchewas flooded with flavour, and the soul of the eastern Mediterranean from this dish was très authentique.

A side of roasted Brussels sprouts ($14) were not the type of vegetable you’d dread eating. Byblos’ version was roasted, then tossed in tahini and yogurt. Every few bites, a chunk of briny halloumi provided a textural surprise.

Desserts flirted with eastern Mediterranean flavours and ingredients. The hazelnut chocolate mousse ($12) was an artistic chef d’œuvre that had been thoughtfully created. Appearances aside, it strayed from the typical chocolate mousse. A frozen mousse interior was surrounded by a chocolate coating. While this part was delightful, the shallow pool of coffee molasses provided an off-putting sweetness. On the side, a bland sweet cream with hazelnuts, kadaifi and caramel tuile made this dessert more decadent than most.

In the midst of a stale restaurant climate uptown, Byblos is a true jewel. Bite by bite, Byblos delivered an intoxicating experience for all senses. Its magazine-worthy interior, unparalleled service and refined menu make Byblos le choix idéalfor a memorable evening.