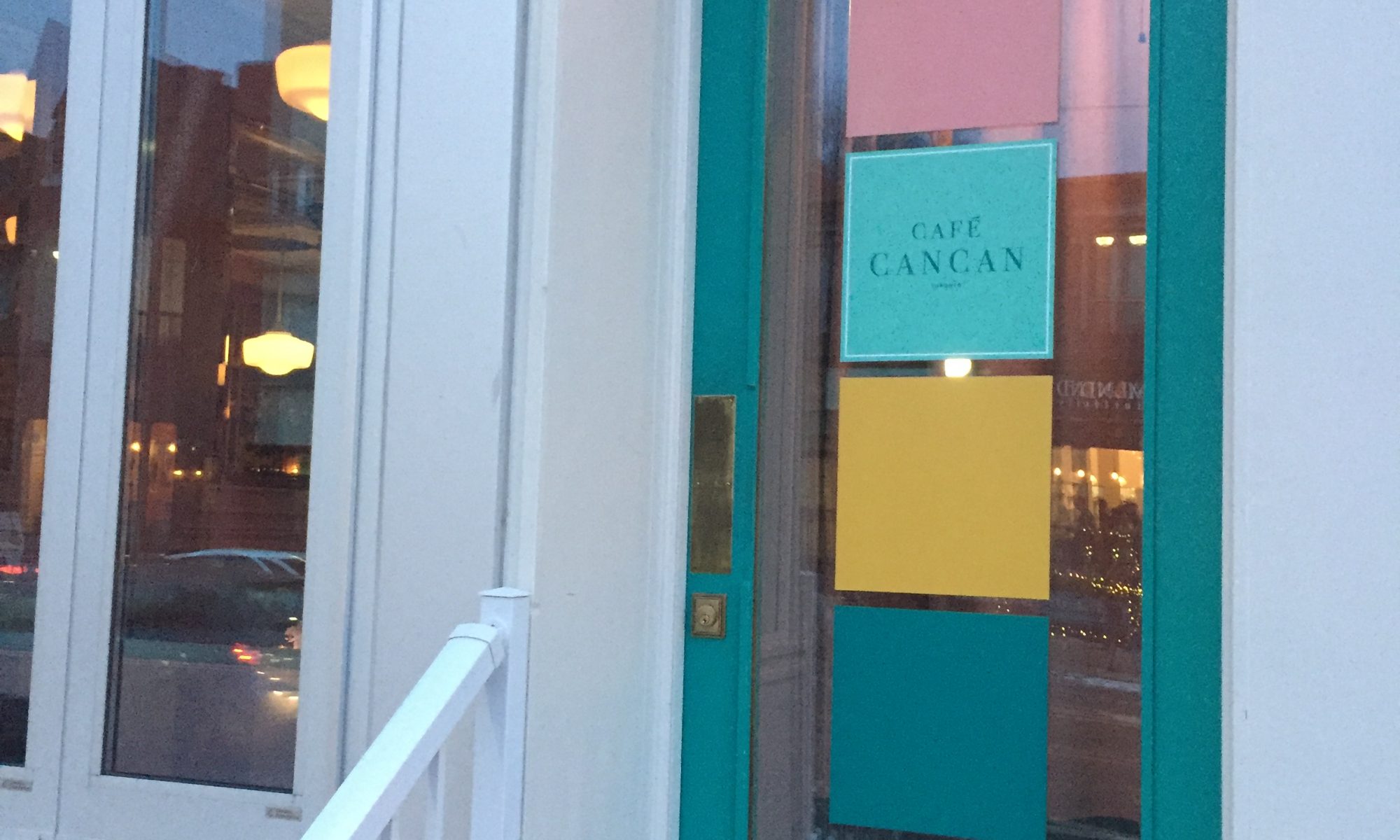 When The Harbord Room closed, I grieved for months. It was a Toronto institution I depended on for a well-executed and delicious meal. The familiarly of the food was comforting, and I always left satisfied.

When co-owners Victor Barry (Piano Piano), his wife Nikki Leigh McKean, and Brendan Piunno (formerly of Carbon Bar), came together to launch a new dining concept in the same space, I shed a few tears, but I didn’t doubt they’d deliver. Together, they created Café Cancan, a pastel-hued restaurant that elevates classic French bistro staples.

If I were Parisian Barbie, Café Cancan would be my dream home. Designed by Tiffany Pratt, the space that was formerly The Harbord Room was hardly recognizable. Its quirky and vibrant style was evidence that Pratt had left her mark. Loud pops of colour—teal, pink, yellow—as well as pastel florals and flamingo motifs filled the dining area. For a newly designed space, it was brimming with character. The curtain-enclosed flamingo nook at the back of the restaurant—an intimate room for gatherings of up to five people—was one example.

While many diners visit restaurants to snap Instagram-worthy photos of the décor (and Café Cancan definitely falls into this category), la nourriture was also worth gabbing about. For a space that was aesthetically contemporary, le menu est composé des plats typiques de la gastronomie française, such as escargots ($16), French Onion soup topped with melted gruyère ($16) and steak tartare ($18). A daily three-course ‘Neighbourhood Bar Menu’ was also available for $39. And, Barry preserved a tradition by keeping The Harbord Room’s much-loved Barry’s Burger ($22) on the menu.

While the group I was with was tempted to experience the East Coast Oyster Mignonette ($32 for 12 pieces), especially after the server raved about how fresh they were, we were too tempted by the mains. The roasted scallops ($26), a new offering that replaced the sole, was calling my name. The opalescent scallops were plated delicately on a bed of de Puy lentils and sauce normade. One bite confirmed that the lentils had been prepared in a classic French way—aromatics were sautéed and the lentils were simmered until meaty, contributing to the dish’s multidimensional flavour profile. It was a generous portion and also came with a side of Cancan salad ($8), a delicious combination of fresh greens and classic vinaigrette that had the perfect level of acidity.

Don’t be turned off by the roasted chicken ($24), which sounds like a basic dish. It was quite the contrary. Served with a perfectly piped ribbon of truffled pomme purée, it was impressive from the instant it was served. The generous portion of skin-on breast was presented with the wing joint attached—a traditional cut in French cuisine. Barry’s use of ras el hanout to season the crispy skin, a North African blend of 20-something rich spices, gave this classic chicken a contemporary twist. And finally, how could I forget the jus—a rich, caramel-coloured sauce that was spiked with vanilla bean and ginger. This poulet was one of the most memorable chicken dishes I’ve had in recent memory.

No French meal would be complete without a juicy steak au poivre ($34). Café Cancan’s version was a small but high-quality cut of tenderloin served with frites and mayo rémoulade. While the thick cut of beef allowed the inside to stay medium, I found the velvety sauce to be overpoweringly peppery instead of bright. The frites, on the other hand, were crispy, thick-cut, and vanished quickly.

While a side of roasted root vegetables ($9) may seem like a winter cliché, they complemented our entrées. The comforting combination of parsnips, sweet potatoes, fingerling potatoes and onions were elevated with fresh thyme and rosemary. I could tell from their texture that they were roasted at a low temperature.

For something un peu sucré at the end of your meal, consider the apple tart for two ($18). It’s prepared to order so it takes about 15 minutes, but after one forkful you won’t regret the timeless combination of apples, cinnamon and crème anglais (poured right in front of you). I would have added some freshly ground nutmeg on top, mais c’est tout. While I’ve had more authentic apple tarts, complete with crisper pastry, this dessert paired well with my cup of herbal tea.

French bistros are difficile to get right, but Café Cancan nailed it. From the knowledgeable servers to the delicious food and ambiance, it’s one of those places that makes you feel like you’re in Paris—if only for a few hours. I’ve heard the brunch is magnifique, so I’ll be rushing back to get my fix. À bientôt, Café Cancan!