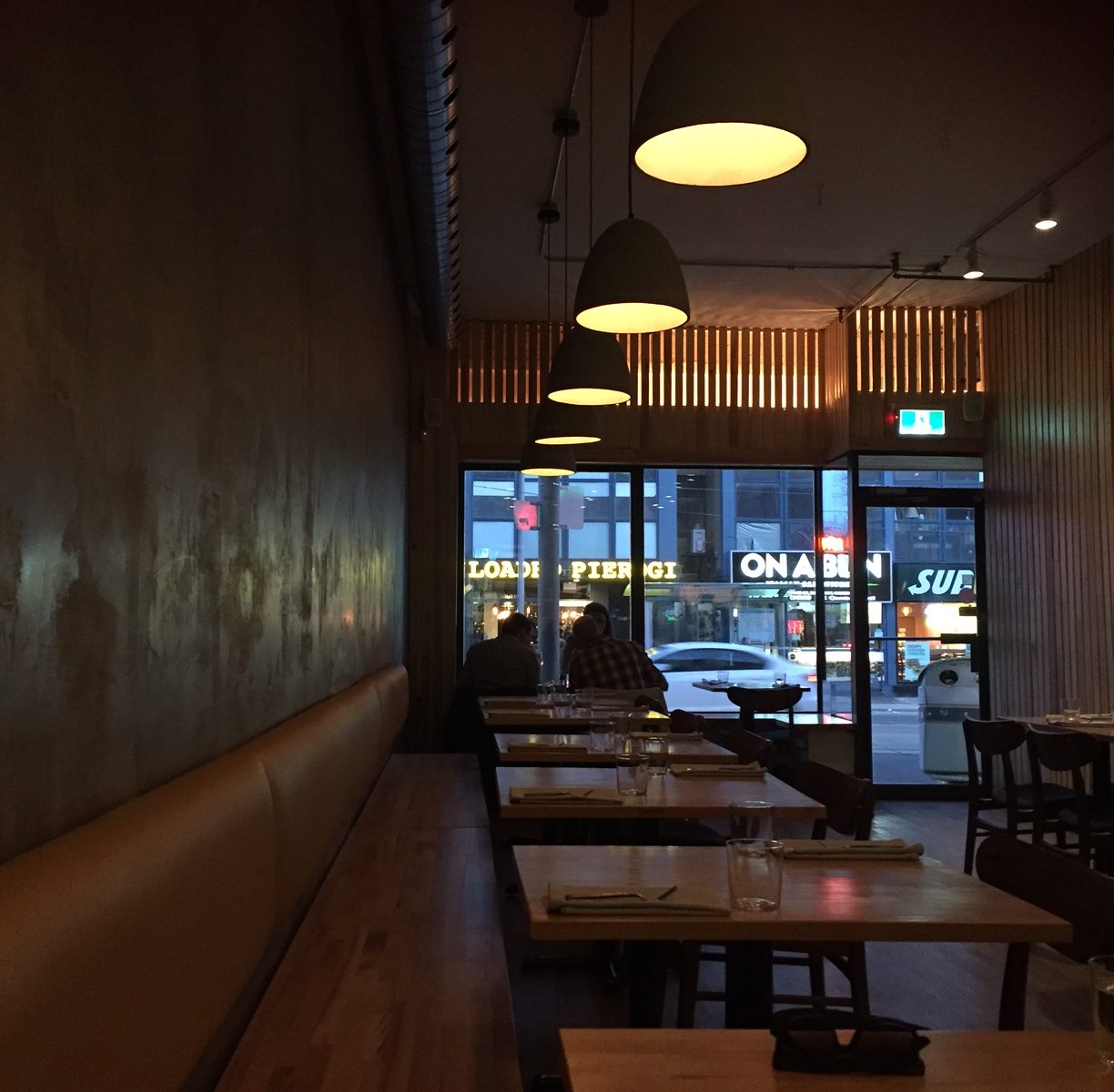 Canis is one of the much-hyped new kids on the block in the Toronto restaurant scene—the brainchild of Jeff Kang,  Bosk’s former chef de cuisine. After hearing stellar reviews about Canis’ four-course Canadian-inspired menu, it was time to see how this new kid truly stacked up.

Upon entering I immediately felt that friendly Canadian welcome I expected—it was genuine  and unpretentious. The décor on the other hand, threw me off as it isn’t what I would call ‘Canadian’. The 28-seat restaurant has stark concrete walls, balanced by panels of thin wood slats on the opposite side. The sleek and minimalist space was cold and contemporary and was more reminiscent of a Scandinavian retreat than of my home and native land. The authentic Canuck feeling didn’t necessarily translate through the overall ambiance, especially because there was no bar. Perhaps the food would…

The open kitchen was a true masterpiece, and it was a treat for both the eyes and palate to be perched beside the passe. Kang and his team of five were gracefully performing like they had memorized an intricate dance. Everyone knew their role, and, when a rustic chunk of charred celeriac caught flame on the Konro grill, it was quickly extinguished by a sous-chef like it was all part of the choreography.

I was salivating like Pavlov’s dog after glancing at the menu for a hot minute. I liked the choose-your-own adventure experience that the four-course menu presented, with three options under each section. With the help of our knowledgeable server we ordered some wine to sip while enjoying the simple flavours of the fresh sourdough bread. A quick glance around the room confirmed that both were house favourites as not a crumb was left on anybody’s plates (including ours).

Our self-curated tasting menu began with the beets and albacore tuna. Both were plated like pieces of art and left us wanting more. The beets were well disguised when they arrived, looking more like tagliatelle pasta than an earthy vegetable. I unravelled the curled beets, only to discover dehydrated beets, toasted almonds, mint and chèvre. The flavours, although far from novel, were spot-on and evoked a sense of Canadian familiarity. I was equally impressed with my guest’s albacore tuna, which was served sashimi-style under a bed of herbs, and it immediately transported my taste buds to the Pacific Coast. It was paired with the most delightful and creamy herb emulsion (that could have used some extra bread to soak up!).

After hemming and hawing, I took the server’s recommendation and ordered the squid and celeriac, which I immediately regretted after seeing my guest’s Humboldt squid (fresh off the plane from British Columbia). A colourful bloom of ingredients popped from the bowl’s charcoal backdrop. We were instructed to mix the ingredients, the squid ink turning a masterpiece into an inky mess. The taste was formidable! The addition of unique ingredients, including onion flower, added to the seasonality of the dish.

Similar to the beets, my celeriac was presented two ways—roasted on a Japanese grill’s open flame and shredded, coleslaw-style (mixed with creamy whey and mustard seed). The surprise element of this otherwise monochromatic dish was the vibrant green nasturtium puree at the bottom. The mustard seed, while a much-needed textural element, was overpowering. Was one of Kang’s crew a little overzealous? S’il-vous-plaît, save the mustard seeds and the coleslaw-like dish for a family BBQ.

If the main course doesn’t leave you with something to talk about, what’s the point? I ignored my instincts to order the sablefish. Luckily, my guest shared a few bites and I was blown away. Commonly known as black cod, this wild-caught fish was cooked to perfection—it was hot, buttery and flaked when pressed lightly with a fork. As for its accompaniments, the charred cabbage, potato and scallop cream balanced the dish properly while not overshadowing the protein.

Following in the footsteps of the celeriac, I would have liked to see some colour injected (a sprinkle of chives, perhaps? Purple cabbage instead of green?) My lamb loin was cooked sous-vide and was underwhelming after tasting the sablefish. Its fatty underside and exposed silver skin made the compressed eggplant and fiddleheads stand out more than its previously-woolly plate mate.

For a lasting impression, one of the most anticipated parts of any meal is the dessert course. I veered away from my predictable “j’adore le chocolat” choice and opted for a fruity finish: pear, koji and almond, sandwiched between thin wafers. Every single bite was heavenly. It was the right combination of cream, crunch and sweetness. As for the chocolate mousse, there was no denying that the kitchen was paying homage to Omaw’s signature key lime pie with its haphazard placement of buckwheat wafers. While the chocolate portion tasted rich and delicious, it had been piped from a pastry bag and resembled something not so appetizing. A calculated table-turning tactic? Hmm…

From bread to bill, the servers were sweet as maple syrup and shared the story of each dish with a sense of pride. Whether intentional or not, elements of Canada’s cultural diversity were creatively incorporated throughout dishes, such as the ricotta chimichurri butter (Mexico) and albacore tuna (Japan).

While I would not call my dining experience particularly Canadian (save for the arctic temperature in the dining room), the culinary journey and the standout plating and delicious flavours were well worth the visit. My heart is glowing for Canis.

Le rubrique de Madame Marie
1 étoile – Run. Before you get the runs.
2 étoiles – Mediocre, but nothing you couldn’t make at home.
3 étoiles – C’est bon, with some standout qualities.
4 étoiles – Many memorable qualities and excellent execution. Compliments to the chef.
5 étoiles – Formidable! Michelin Star quality. Book a reservation immediately.