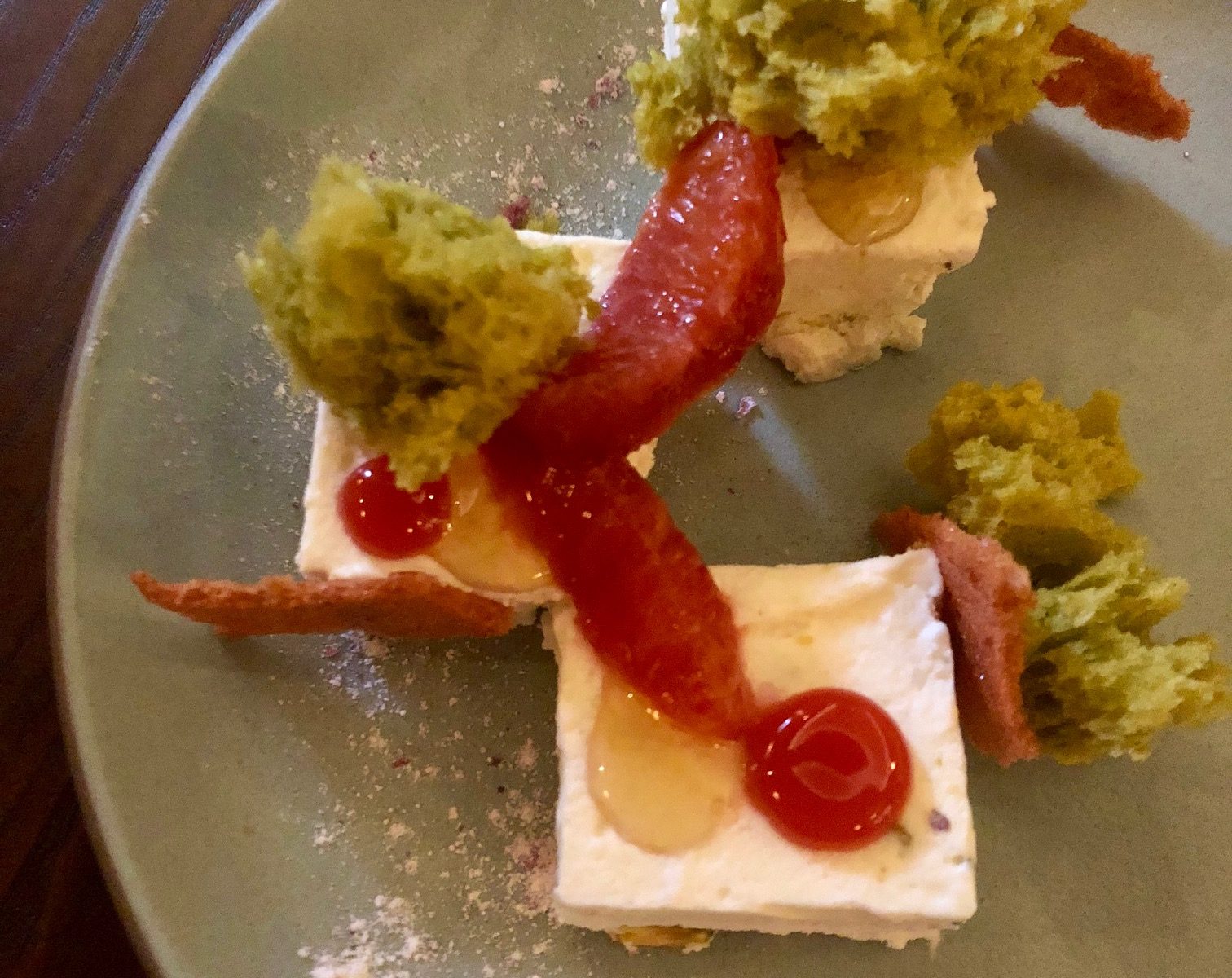 If you’ve been to esteemed Toronto restaurants Campagnolo and La Palma, you’ve witnessed the culinary handiwork of Chef Craig Harding and Alexandra Hutchison. AlterEgo is the recently-birthed restaurant group that brings together this dynamic husband-and-wife team, as well as Jack and Domenic Scarangella, and Steve Christian (Mercatto). Constantine is AlterEgo’s new Mediterranean restaurant, inside The Anndore House. Named after Constantine the Great – the Roman emperor who designated Istanbul as the Roman capital, which remained the capital of the Empire for a thousand years – the restaurant pays homage to full-flavoured coastal Mediterranean cuisine.

Celebrating the diverse cuisine of distinct regions found in the Mediterranean, Constantine cultivates an intimate and inviting atmosphere within The Anndore House, a boutique hotel on Charles Street. Being in a hotel, the spacious, dimly-lit and low-ceilinged space served everything from breakfast to dinner. The kitchen truly was the centerpiece of the art deco style restaurant, with ample bar seating to observe the action (something j’adore). And, despite it being in Yorkville, the usual pretentious vibe and high price tag were absent – something that would normally be off-putting at many of the other highfalutin establishments in this neighbourhood.

I was recently there with a small group for dinner. Having barely been open for a month, it was full of patrons and our reservation was booked weeks in advance. We were seated at a comfortable banquette by a cozy fireplace. While I enjoyed the ambiance of the interior, patio seating would have made an excellent setting for people-watching and après-travail cocktails.

Speaking of beverages, the wine list transported me on a tour of the Old World (with an extensive collection of reds and whites from Italy), eastern Mediterranean, and southern Mediterranean. The creative collection of signature cocktails, such as the Lavandula ($13), was also aligned with the Mediterranean theme – a concoction of Lillet Blanc, Dillon’s cherry gin, Parés Baltà Cava, lavender, and lemon. But you didn’t have to imbibe to have your horizons expanded. The Pineapple Tea ($8), a non-alcoholic libation featuring black tea, pineapple syrup, and soda was slightly sweet and refreshing.

After popping the cork on a bottle of Spanish Rioja, we perused the expansive menu. The swirl of flavours reflected the team’s expansive definition of Mediterranean, which embraced a whirlwind tour of Italy, Greece, Spain, Lebanon and Turkey. We opted to leave the food in the hands of the chef with the family-style dining option priced at a reasonable $65 per guest.

Like most restaurants these days, dishes were made for sharing. The menu was divided into small plates, vegetables, pizza, pasta and grains, meat and fish, and poultry. We knew we would leave with nos ventres pleins! The kitchen was also extremely accommodating to one of our guest’s food sensitivities.

One of the most exciting parts of Contstantine’s chef-curated sharing menu was the anticipation of what was coming. First to arrive was a small plate of Swiss chard fritters ($8). Originally a Turkish staple, these intensely green-hued fritters had a wonderfully concentrated earthy flavour of chard and herbs. They were a tasty and merveilleux way to start our Constantine experience.

Le prochain plat highlighted one of my favourite foods – le fromage! Perfectly grilled squares of halloumi sat on top of panella ($11) – flat fried cakes made from finely ground chickpeas. Labneh, a lush strained yogurt, acted as the perfect element to dip the briny halloumi. It added a vaguely tangy note without being too overpowering. Halloumi itself is rather bland, but the acidic accents of pickled chili compensated nicely while adding a vibrant hue to the plate. One bite of this dish was an interesting fusion of various Mediterranean cuisines.

The next two dishes impressed me in their use of innovative ingredients, but didn’t leave my palate satisfied. Fennel and Cara Cara ($14) was an underwhelming plate featuring flame-grilled fennel and red endive doused in a Campari vinaigrette and fennel pollen. What was surely intended to be rustic plating instead made the dish appear like it had been thrown together in haste. The only redeeming quality was the juicy segments of Cara Cara navels that were dispersed throughout the mixture. I appreciated the used of this pink-fleshed orange as it was less acidic than other citrus varieties and tasted more like a berry. It balanced the anise-like taste of the fennel nicely.

The Kale, Rutabaga, and Feta Salad ($14) scored higher than its predecessor in terms of presentation. Marinated kale, cubes of rutabaga and feta were accented with jalapeño, sesame, pomegranate and dill. It was definitely an interesting combination of ingredients, but it didn’t necessarily transport me to the Mediterranean.

While I don’t necessarily think of carrots as a showstopper, the sweet and spicy fire from the Spiced Carrots ($15) changed my point de vue. The perfectly tender carrots were served with baby mustard greens and dabs of herby chimichurri. While visually bland, the dish was actually brimming with nutty flavor from the toasted sunflower seeds.

La viande ran more on the Mediterranean side, with selections of grilled whole fish, duck, lamb, rabbit and various cuts of beef. The Lamb Ribs ($19) were promptly polished off at our table. Marinated in sticky pomegranate molasses before being flame grilled, they resulted in tender, meaty pieces that made you want to lick your fingers. An electric sprinkle of tart dukkah, an Egyptian condiment consisting of herbs, nuts, and spices, was a welcome addition to an already-excellent dish. And the buttermilk dipping sauce…Mon Dieu!

The Branzino ($25), contrary to my expectation, came in rolled fillets  instead of a whole fish. Nestled inside each rolled parcel was a magical mixture of currants and pistachios, which amplified the crunch factor. The mild fish was elevated with its nuanced flavour profile – mild, smoky and sweet. Almost everything seemed to touch fire, and the faint smokiness of the branzino was la preuve délicieuse.

Our last protein of the course was the Cornish Hen ($28). While this bird can sometimes be familiar in taste, it had a surprising undercurrent of smoke from the wood fire, charred lemon, and sumac. The flavours were deep and delicious.

For dessert, smooth squares of creamy nougat were topped with pistachio sponge cake that, franchement, didn’t look appetizing at all. On top, blood oranges were scattered, adding a vibrant splash of colour. I couldn’t think of anything like it, in taste or in appearance, so félicitations to Constantine’s innovation on this one.

Constantine’s chef-curated menu provided a good representation of the full menu and of the kitchen’s talents; however, some editing was necessary for it to qualify as truly Mediterranean. For a new spot that just opened its doors, service was friendly, knowledgeable and attentive without being intrusive. Despite one wrinkle at the end with the credit card machine, we enjoyed every minute of this intimate dinner and never felt rushed. For AlterEgo’s first foray into the hotel market, they’ve given guests — from near and far — something to swoon over.