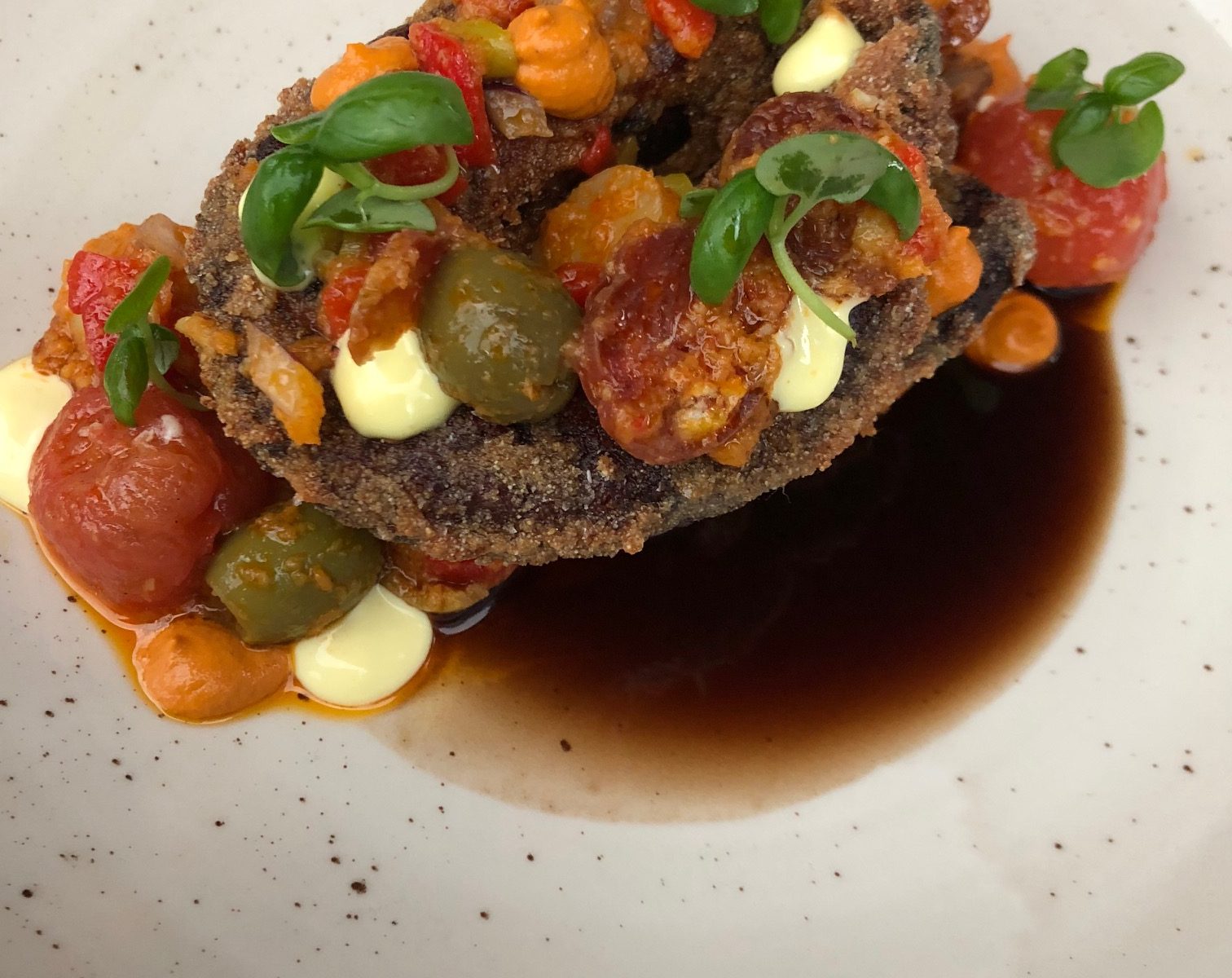 Shortly after I moved to the big city, I experienced one of the most exquisite tasting menus of my life at Chef Claudio Aprile’s Colborne Lane. Years later, I was disappointed to learn that a popular nightclub had usurped its charming venue. Although, like most Toronto restaurants, Colborne Lane was here today, gone tomorrow, I cherish it as mon premier goût of the city’s epicurean culture. Aprile was also the mastermind behind the Origin chain and had three locations across the city. As an Origin devotee, the same impression of Aprile’s cuisine left my stomach longing for more. So, when I heard that Aprile boarded up his three Origin outposts and collaborated with co-owner Henry Wu (Luckee, Wahlburgers, Lee) to deliver Copetín – a place where foodies could get a fix of “inventive and elevated” cuisine, I was immediately affamée!

Copetín, a colloquial word that Aprile’s mother used, means “community and social.” And, as its name connotes, Aprile envisioned a spot where people could pop in for a drink after work or delight in a more elaborate meal.

Situated on the corner of King St. E. and Church Street, its royal blue facade and gold logo allude to a trendy restaurant that serves elevated cuisine. Given its prime location near the St. Lawrence Market, as well as being backed by a celebrity chef (Aprile was a MasterChef Canada judge), one would expect a steady flow of patrons. Contrary to what one might expect, Copetín had the smell of death when I went for dinner one summery evening. Hordes of tables begged for ravenous patrons – even on the patio, which was sparsely populated. I hoped that the food and service might counter my initial impression.

While Copetín is in Origin’s former flagship location (which was always bustling), the vibe was startlingly different, partly due to its compartmentalized layout. A massive dining room with a 50-seat capacity was intentionally sectioned off by the center kitchen. The once-communal vibe at Origin, thanks to the low-level seating surrounding the kitchen, had been stripped away. A high partition now replaced the front-row seats, which obscured the previously visible kitchen and created a more secluded feel. As for décor, a massive piece of wall art by Montreal artist Stikki Peaches, as well as a vinyl-lined wall showcasing some of Aprile’s favourite musicians, provided vibrant splashes of colour and acted as conversation pieces. Other than these features, there was nothing original about the décor or ambiance. The lighting was dim and unwelcoming. Remnants from Origin, such as the tired furniture, had been lazily repurposed.

Because it was a tepid summer evening (albeit with an ominous-looking sky), my guest and I decided to dine al fresco. En route to the patio, I spotted a broody-looking Aprile scarfing down some dinner. The look on his face was no different from the feeling I got when I entered. Était-ce une coïncidence?

Shortly after easing into our seats, we were greeted warmly by an attractive and aloof server who likely worked as an actor/model during his off-hours. He delivered some menus before whisking away. Although there was nothing unique about the ambiance on the patio, it had a bar that featured gin by The Botanist and a built-in herb garden, allowing patrons to garnish their bespoke cocktails. The concept was fresh and creative, and was on par with Copetín’s mandate to offer something inventive.

The Sour Saint ($13) cocktail featured Botanist gin, Aperol, lemon juice, egg whites and strawberry-basil syrup and would have been a refreshing choice; however, a glass of Rodney Strong Chardonnay was the perfect antidote after a demanding day au boulot. The wine list offered many bottles from the New World and the Old World, but selections by the glass were few and far between.

For a restaurant of this apparent caliber, the menu was succinct, très cher, and didn’t strike me as inventive. According to its website, Copetín is inspired by Toronto’s culinary background, diverse neighbourhoods and cultures. Appetizers included octopus, beet salad, a rendition of beef tartare, to name a few. For the entrees, rack of lamb, whole branzino and a half chicken were some of the offerings. En plus, I was delighted to see a few legacy dishes from Origin – the popular duck tacos and pear, honey and burrata made an appearance. But, how could these dishes then be considered inventive?

My guest and I shared three dishes. Pour commencer, we had the pear, honey and burrata ($15) and the octopus ($17). I had fond memories of biting into Origin’s fresh burrata on toasted baguette with roasted pears, sticky honey and buttery pine nuts. Copetín’s version had everything but the pine nuts and was not quite as good as I remembered, but nevertheless, it was a delightful start to the meal.

A meager portion of deep-fried octopus arrived next. Specks of crème fraîche and microgreen accents decorated the dish. An equally sparse serving of puttanesca sauce topped the octopus with thinly-sliced chorizo buried throughout. Although the styling was thoughtful, I was hoping that a bite would further ignite my senses. One bite of the overcooked protein told me that the fryer needed an oil change. The temperature of the sauce and octopus was also inconsistent. C’est dommage, because this dish had potential.

Just as we were polishing off the octopus, the ominous sky opened up. While our server was nowhere to be found, we ushered ourselves into the quiet dining room to finish our meal.

Our last dish, and perhaps the most disappointing, was the half roast chicken ($35). For the price point, and the dish’s name, I was expecting a significantly larger portion than what landed on the table. What looked like half a breast of skin-on chicken sat on a bed of oily wild rice. A few roasted chestnuts and rings of roasted leek accented the chicken. While the portion size left me aghast, I appreciated the use of chestnuts in this dish since it’s not an often-used ingredient. The soft texture and slightly sweet flavour were an appropriate match for the chicken. The buttery rice was grainy and flavorful, but too rich to finish. When our server passed by to check in, I mentioned that the portion was small for a half chicken. That’s when she told me it was a Cornish hen. That left a sour taste dans ma bouche.

Like Aprile, the serving staff seemed equally checked out. As our meal was coming to an end, we, too, were eager to depart from this negative space. Since the days of Colborne Lane and Origin, Aprile’s standards have evidently plummeted. Copetín is sheer evidence of his apparent lack of care for delivering an experience that any diner should anticipate. Toronto restaurateurs, Aprile included, know that the scene is fierce and furious. Just like that hard-hitting feeling I got when I walked in earlier that evening, I sensed that Copetín was suffocating. If the present is any indication of the future, I predict that Copetín won’t live to see its second birthday. And this could be a blessing, because perhaps Aprile has something else—something better—up his sleeve.

328 Replies to “Copetín – Mostly misses at the former Origin”