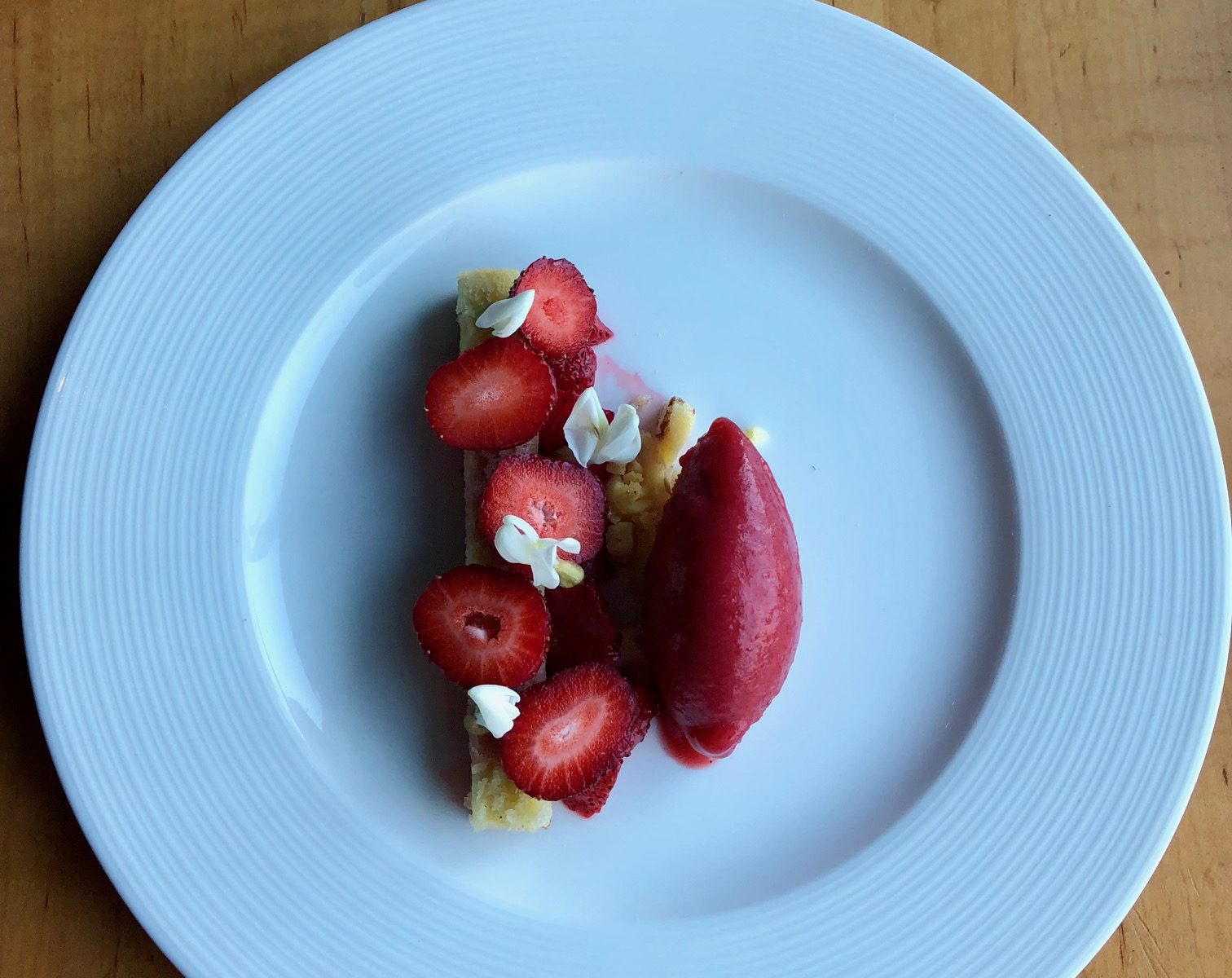 Core Restaurant brings a new Canadian-themed dining experience to Toronto. Named after its location in the heart of the Leslieville neighbourhood, Core places a strong emphasis on local and seasonal ingredients. Focused on an evolving five-course tasting menu priced at $70 per person, the season’s finest ingredients come to life in consumable form.

Chef Hyun Jung Kim (George Restaurant, Globe Bistro) and Mark Moffatt (Bosk, Reds Wine Tavern) are the individuals behind Core. With Kim’s diverse experience gained from working at some of Toronto’s high-end restaurants, and Moffatt’s sommelier expertise (he’s studying for his Master Sommelier), Core has all the right ingredients to succeed.

On a warm summer night, I ventured to the city’s east end to see how this restaurant truly measured up. The high-ceilinged space was nearly empty when I arrived, albeit, my reservation was at a geriatric dinner time. My guest and I were led to our table at the front of the restaurant, where the garage-style door was open to allow us to enjoy the tepid climate while dining. Construction from across the street made for a less-than-ideal view, and dust and particles floated into the restaurant.

The vibe was appropriate for the neighbourhood – mixing warm, upscale elegance with contemporary casualness. Exposed brick walls, ceiling vents, refined furniture, as well as a collection of local art added some colour to the industrial space. The only thing I found slightly tacky about the décor were some oddly-shaped pendant lights.

Beyond the art, localism was an important theme for the restaurant. One of Core’s philosophies involves embracing local food and suppliers. For example, the restaurant sources its meat from its neighbour, Butchers of Distinction.

Service was overly attentive at first, bordering on eager. This was likely because we were the only ones in the restaurant, but it wasn’t a negative thing. Moffatt greeted us warmly, and mentioned a highly-recommended wine that had just arrived from Spain: Txakolí de Getaria (2016) from Adur winery. We ordered a bottle (since all wine is half price on Wednesdays) and sipped it while nibbling on the homemade bread and butter. I could taste the youthfulness as I swished the wine in my mouth. The acidity built slowly, and it left a slightly salty taste on the palate. As for food, my guest and I selected the tasting menu, although à la carte options were available. Core also offered standard wine pairings for $40 and premium wine pairings for $50.

​Moments later, stunning plates that balanced beauty and technique, without being overly ostentatious, arrived – complementing the overall ambiance. I could see the influences Kim absorbed from his time at George Restaurant, especially with the amuse bouche. Dipped radishes and lamb tartare atop of dainty toasts were placed on a folded white serviette — almost like a blank canvas that highlighted la nourriture.

Starters included a scallop crudo, a mouth-watering duck terrine as well as white asparagus. The crudo was more delicious with every bite, and highlighted the kitchen’s skill. Acidity was well-balanced. Next up was the terrine. It wasn’t the chunky, rustic type you’d expect at a casual French bistro. Instead, it was a refined-looking slice with colourful accents of hibiscus and rhubarb. Its texture was moist, and its taste was gamy. The flavorful foie gras provided a lovely counterpoint to the tartness of the rhubarb, and was divine when spread on the homemade slice of toasted brioche. This was a showstopper – in taste as well as appearance.

Asparagus is commonplace, especially the green variety. Core’s white asparagus dish; however, offered an earthier, nuttier flavour that its green counterpart. A crispy piece of pork jowl that had been slow roasted to perfection sat on the asparagus — begging to be shredded by my fork. Every bite of this underrated cut of meat was divine. One thing I would have modified about this dish was the cooking time of the asparagus — it was too limp. Spruce added a nostalgic fragrance of holiday time. The ribbon-like curls of vegetables for garnish and shallow pool of buttery reduction were the perfect ways to tie the dish together.

Pour le prochain plat, we ate Icelandic cod. The fish’s pearlescent flesh had been pan fried and roasted. It flaked in large pieces, demonstrating that it had been cooked perfectly. In flavour terms, it had a slightly sweet taste that was lifted by tender carrots, earthy fava beans and crème fraiche. Was it my favourite? Mais, oui!

For the next course, I was shocked that we received another plate combining pork and asparagus; however, the presentation stressed skill and deftly arranged components. While the cut of aged Tamworth pork was perfectly pink and cooked two ways, I was expecting something more innovative. The accompanying green asparagus, curlicues of fiddleheads and earthy morels popped on the white plate and added elements of texture. I noted the attention to detail with the perfectly trimmed and peeled asparagus, which eliminated the woody exterior.

Finally, the season’s local ingredients sang in the strawberry financier, a delicate French almond cake flavoured with vanilla. Not only was it visually arresting and well-honed, but it was the perfect portion and dose of sweetness to round out the meal. Bravo!

From the moment we entered to the moment we left, service was impeccable – likely from the team’s combined years in the hospitality industry. Servers were astute, attentive and well-mannered — consistent with the feel of the refined dishes. Moffatt took an active role in conversation, artfully telling us about the wine he poured. And there was a personal touch that I craved — chefs presented their artistic creations table-side. I took a liking to the chef de cuisine, Lewis Robinson, and his fine handiwork. I predict he’ll go far in this industry.

Core’s cuisine, a fusion of Canadian and French, is clean and bold and never contrived. Other than a slight mischarge on our bill, Core is worth visiting for a dining experience where the standards are high.

55 Replies to “Core Restaurant – Delight in the details”