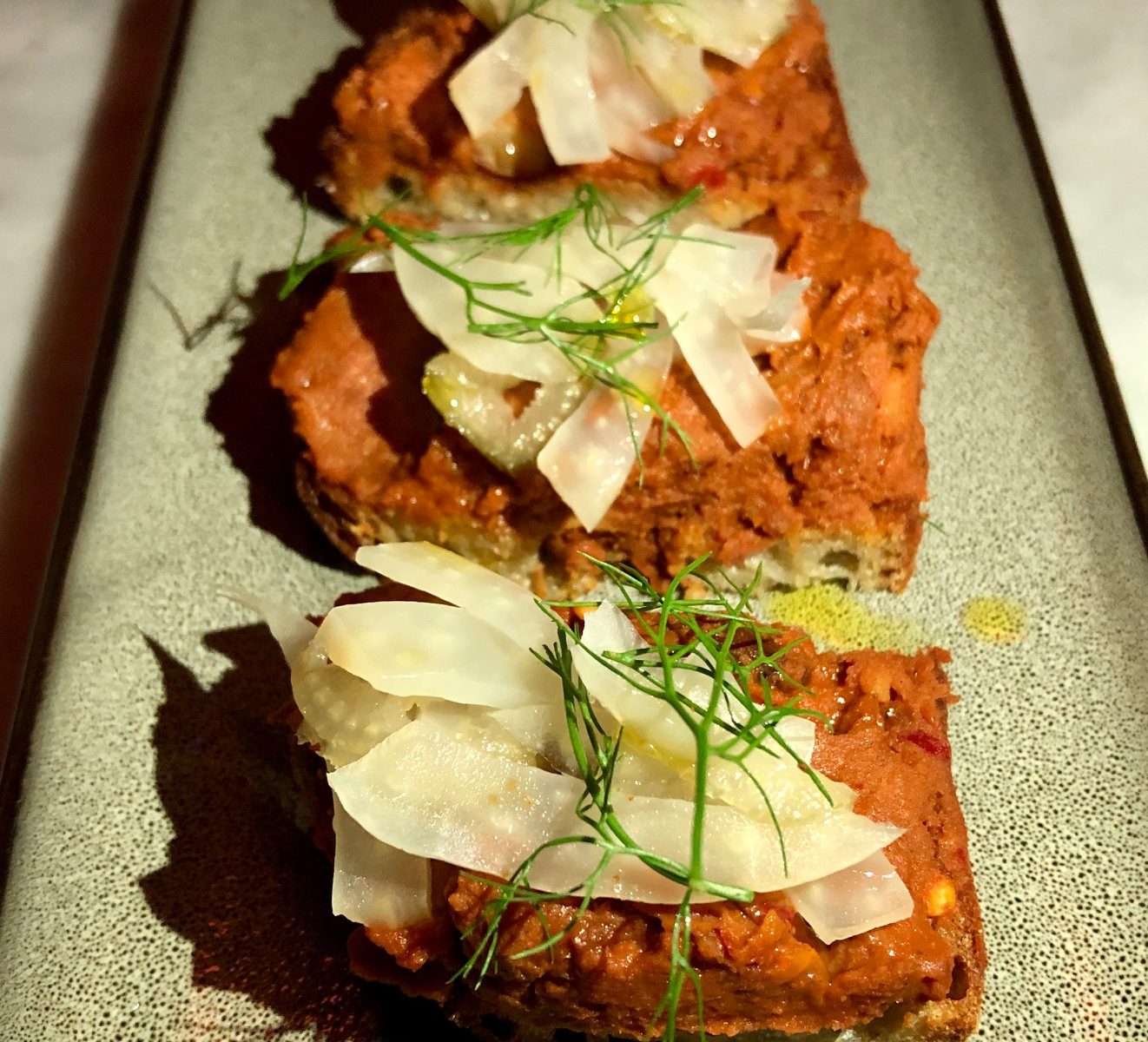 CRU, the Financial District’s newest modern fine dining restaurant, has taken over the former Lbs. restaurant with a fresh vision and aesthetic improvements that shine a spotlight on art. It aims to present a unique, creativity-driven hospitality experience with contemporary Canadian dishes and seasonal ingredients.

Jonathan Gonsenhauser, the same owner as lbs., is at the helm of CRU. His executive chef, Jon Williams, is well-rounded with an impressive resume. Not only did he work in notable Toronto establishments, such as Richmond Station, he also honed his skills in Michelin-starred restaurants including The Clove Club, Dinner by Heston Blumenthal and Hedone.

À mon avis, it’s not hard for any restaurant in the FiDi to succeed — kind of like a kid with a trust fund. Financial District restaurants have a captive audience — bankers on power lunches and executives looking to splurge on clients. I was curious to check out CRU to see if it would make a stronger impression than its lobster, burger, salad-loving predecessor. They say you can’t judge a book by its cover, but CRU’s name alone was a convincing place to start.

On a Wednesday night, mes amis joined me for dinner. Our party was seated in the front section of the bar area. Long blue leather banquettes lined the windows, which were draped in lush floor-to-ceiling blue velvet curtains. With luxurious finishes, it didn’t feel stuffy. Several black and white murals by Polish artist Swanski added some personality to the reinvented space.

Predictably quiet for mid-week, I was able to pay special attention to the layout, which seemed to work against it. With a back kitchen, a bar on one side, and a large dining room on the other, there wasn’t a flow of energy between the space. Overall, it had an air of opulence, and a menu to match.

Williams came by and introduced himself before sharing CRU’s ethos. Dinner items could be ordered in a tasting format (five or seven courses for a reasonable $65 and $80, respectively) as well as à la carte. Our party of four decided to try several items à la carte pour partager.

Shortly, after we popped the cork on a bottle of fruit-forward Submission from Napa Valley, a server delivered an amuse bouche, consisting of meringue topped with foie gras torchon and spiced apple. A delightful combination, indeed — however, the foie gras was ruggedly sliced like Kolbasa, which detracted from the very nature of its delicacy.

The menu was divided into four sections: “To Share”, “Starters”, “Mains”, and “Sides + Salads”. Each part offered a sense of familiarity with a dash of lavishness. Par exemple, a more mainstream charcuterie board ($21), which was supplied by Jackson’s Meats, could be found alongside fancy-schmancy caviar doughnuts ($16).

Two of my guests had food sensitivities, and the restaurant was extremely accommodating — I would have expected no less from a restaurant of this caliber. We started our CRU experience with a handful of items to share: vegan ‘nduja ($11), grilled eggplant ($13) and burrata ($19).

Si vous aimez the spicy Calabrian take on salumi sans viande, CRU’s vegan version might be a reason to visit. Layered thickly on a slice of grilled bread, one bite confirmed its full-on flavor. The red pepper and tomato-based mixture emulated the real thing — complete with fiery spice and fruity notes from the tomatoes.

Le prochain plat was a curious presentation of eggplant. The sliced vegetable, placed skin side down, resembled the shape of a bedpan. But appearances aside, it was delicious and tender. Glazed in miso and accentuated with Japanese basil (shiso), it was colourful and satisfying. The acidity from the pickled vegetables and roasted pine nuts on top worked well with the tender insides. Caramelized, slightly charred skin tied everything together. Pure deliciousness!

A generous portion of burrata, resembling a cloud, appeared next in a mini cast iron Staub — however, it begged for a serving utensil. Paired with homemade bread as well as some gluten-free crackers, it was delightful.

At times, we were waiting for what seemed like an eternity for our mains. When the angus striploin finally arrived, it elicited a few oohs and aahs from our group. We admired the plate — glazed carrots angled out around slices of perfectly cooked meat. Potato pavé, a slightly more refined version of scalloped potatoes, elevated the dish and transformed a traditional plate into more contemporary fare. The red wine jus that drizzled all the elements was more like a manufactured ketchup than a classic French sauce.

The duck was a specialty, and after one bite, we knew why. Patiently aged breast produced a meat with rich, complex flavor that was not easily forgotten. And I loved the way the confit squash added a pop of colour on the plat noir. Spice and crunch came from the pumpkin seed crumble and there was just enough to add an unexpected element.

CRU, while having a diverse menu, is known for seafood. The seared scallops came slightly more browned than I would have liked. Six sea scallops – a generous portion for the price – sat on a what appeared to be a pile of mush. While it didn’t look appetizing, the mixture of spaghetti squash, Brussels sprouts and XO Sauce worked surprisingly well. Presentation aside, it was the most innovative spin on a scallop dish in recent recollection. Although the scallops’ flavour was less surprising, there was vigor in its collision with the other elements.

Mon plat préféré was the arctic char — its silky texture countered by crispy skin. Also on the plate was the best sweet potato I’ve had in my life. The caramelized vegetable practically melted dans ma bouche and I savoured each and every bite. Charred green onions and chimichurri added a spicy kick to balance out the fattiness from the fish and the sweetness from the sweet potatoes. No one would have to twist my arm to revisit for this dish alone.

The Brussels sprouts and pommes aligot were nice complements to our meal. Brussels sprouts had been charred and tossed in maple syrup and bacon, adding a Canadian flair. And if you’re a fan of mashed potatoes, pommes aligot might be your new BFF. Rich, supple, smooth, and silky mashed potatoes with half their weight in melted cheese demonstrated that Chef Williams had perfected this French classic.

Before we left, the server delivered a sweet ending: a meringue with sour cherry. It was a déjà vu of the foie gras torchon because it used the same crispy base.

We departed with full stomachs. All dishes were priced fairly for the portion size and presentation proved that la cuisine was skilled. Although we waited awhile for the mains to arrive, they were, for the most part, exquisite. Service, on the other hand, was a different story. Between the courses, some of the small details in service were absent. Par exemple, bread crumbs and other food particles were left on the table and serving cutlery was missing more than once. I never want to flag this for my server because they should already know. Excusable for a diner, yes, but not for a restaurant of this caliber.

CRU has some of the most delicious food I’ve tried in the Financial District. If you’re looking for a restaurant with quality food, tasteful art and sophisticated cocktails (Regards Kyoto, for example) to absorb the pulse of Toronto, CRU fits the bill. I’m excited to see how CRU continues to define Toronto’s dining scene — it definitely has potential.