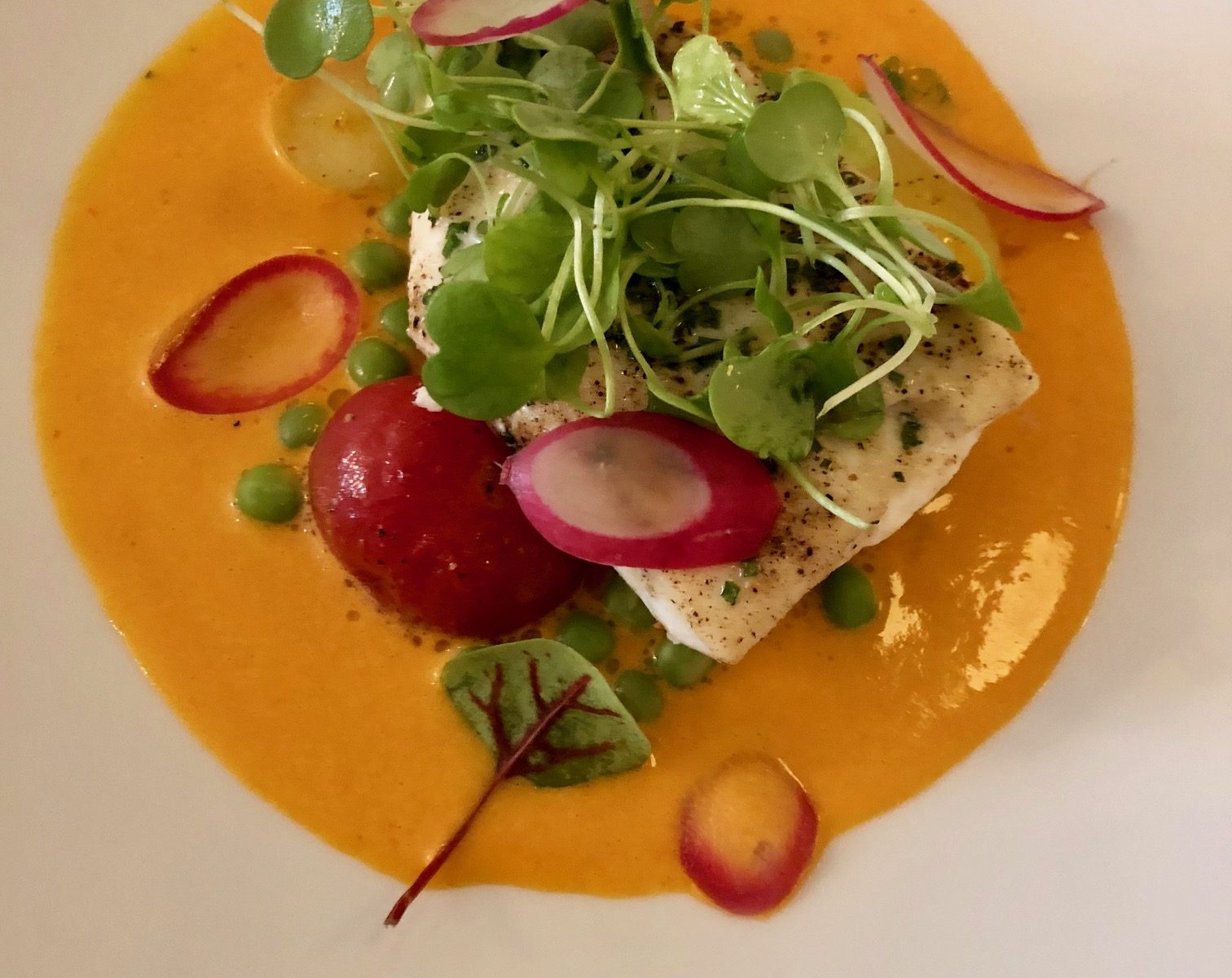 FK, formerly Frank’s Kitchen, was recently reincarnated in the St. Clair west neighbourhood. The restaurant’s periwinkle exterior – in all its glory – signifies new beginnings for Chef Frank Parhizgar and Shawn Cooper, the husband-and-wife team who are now sole owners of the restaurant. Parhizgar is a well-respected chef and self-made restaurateur who honed his craft under the tutelage of Jean-Georges Vongerichten in New York City.

If you ever dined at Frank’s Kitchen in Little Italy, you knew it produced top quality plates and an unparalleled dining experience. It was a place you could return to time and time again, and know that you’d walk away with your expectations exceeded. After an enjoyable outing at FK, I discovered that it was no different from its previous iteration in that regard.

FK’s vibe was fresh and fancy when I walked in for dinner one evening. The light and airy space featured a breathtaking contemporary floral mural behind the bar. Crystal pendants hung from the ceiling, giving a welcoming glow to the space. The once-narrow dining room at Frank’s Kitchen was now two spacious dining areas with a 52-seat capacity. Dark blue banquettes and gold accents played off the restaurant‘s exterior. Mirrors lined the walls, adding more light to the space.

Like Frank’s Kitchen, the daily menu at FK focused on contemporary cuisine with bursts of Canadiana. Ingredients supported local farmers and everything was made in-house – from the charcuterie to the bread, down to the bon-bons at the end of the meal. Just one look at the menu made me salivate. Offerings included everything from seared scallops with sweet corn and pine nut gremolata ($33) to braised Ontario rack, loin and shoulder of lamb with a full-bodied Syrah reduction ($39). While the menu only had seven appetizers, seven entrees and two sides, there was no shortage of appealing dishes – so much so that it proved difficult to choose just one. Our server made our decision-making process even harder by reciting daily specials, which all sounded equally merveilleux.

As for libations, I could tell much thought had been poured into the wine list. Selections from the New World and Old World were well-balanced, and serving staff were knowledgeable about the tasting notes and suggested pairings for each. My guest and I shared a bottle of Submission from Napa.

After popping the cork on our wine—one of the best we’ve had in a while—an assortment of fresh bread arrived. Hearty slices of focaccia and sourdough begged to be eaten.

An amuse-bouche, consisting of a plump mussel covered in a brightly-hued strawberry and tomato mixture arrived. While my taste buds weren’t lured in at first bite, I appreciated the innovative flavour profile.

While sipping my full-bodied Cab Sauv, I pondered the strategy behind said amuse-bouche. Perhaps it wasn’t meant to be amusing – preparing the diner for what’s to come. And what came next was nothing short of mind-blowing.

At the server’s recommendation, we opted to start with the octopus special. The vibrant dish, which was a nod to Spanish cuisine, had oversized flavours. The normally chewy protein had been expertly braised in blood orange juice, and, as a result was very tender with a faint sweetness. Sitting on a smear of garbanzo bean purée, the faint notes of cumin and garlic provided a delicious umami flavour that balanced the citrussy notes from the blood orange. En plus, the capers, chickpeas and scrupulously-peeled heirloom tomatoes, as well as their juices, elevated the octopus to higher levels of satisfaction. We were so impressed and made sure we mopped up every bit of the sauce.

Did my experience get better from here? Bien sûr! My guest and I shared the elk tenderloin ($37) and the halibut ($34). A magazine-cover-worthy filet of snow-white fish popped on its backdrop of fire-orange romesco sauce, with an equally fiery and nutty flavour. Typically, fish and romesco are a perfect match, and this dish was no exception. Crisp peas and heirloom tomatoes added a kick of colour, flavour and texture that elevated a normally bland–tasting fish. And, a great deal of care was dedicated to the plating. Garnishes of mandolined radishes and a delicate heap of baby arugula added a sophisticated finish.

But the most dramatic dish – a true showstopper that forced me to pause, admire and idolize the chef’s skill – was the elk. The contemporary plating showcased four generous pieces of elk tenderloin, placed in a square with accents of wild mustard ravioli haphazardly placed between the succulent morsels of meat. Homemade pasta is difficult to master, and regrettably the ravioli was evidence. A slightly waterlogged interior of bland, mushy wild mustard detracted from the dish’s appeal. While I was let down by the underwhelming flavour of the ravioli, the beefy, clean and slightly sweet finish of the elk paired perfectly with our wine, making it more enjoyable. The rich red cherry jus on the white plate emulated blood, and expertly-diced accompaniments of popsicle pear, confit crosnes (or Chinese artichoke) and pickled breakfast radish danced around the luscious protein.

After a satisfying meal, we opted not to tempt our taste buds with dessert. On a positive note, complimentary house-made bonbons arrived with the bill, and provided a morsel of sweetness that I was craving. Although service was smooth and informative, there was one mishap at the end. My guest and I were not offered any tea or coffee following our meal. Sometimes, I like to digest my meal with a cup of thé de menthe, and it would have been nice to let us savour our post-meal glow instead of rushing to deliver the bill. While I’m on the topic of bêtes noires, I also would have appreciated the option to book my reservation online instead of calling in to an answering machine.

Fast forward a few weeks, and I’m still dreaming about my culinary journey at FK – et quel beau rêve! Without a doubt, Parhizgar’s cooking is that memorable. And, Cooper’s front-of-house service is right up there, aussi. One visit to FK, and you’ll immediately respect Parhizgar’s culinary savoir faire and hold him in a high standard. And, it’s highly probable that you’ll be back for the elk – among many other dishes.