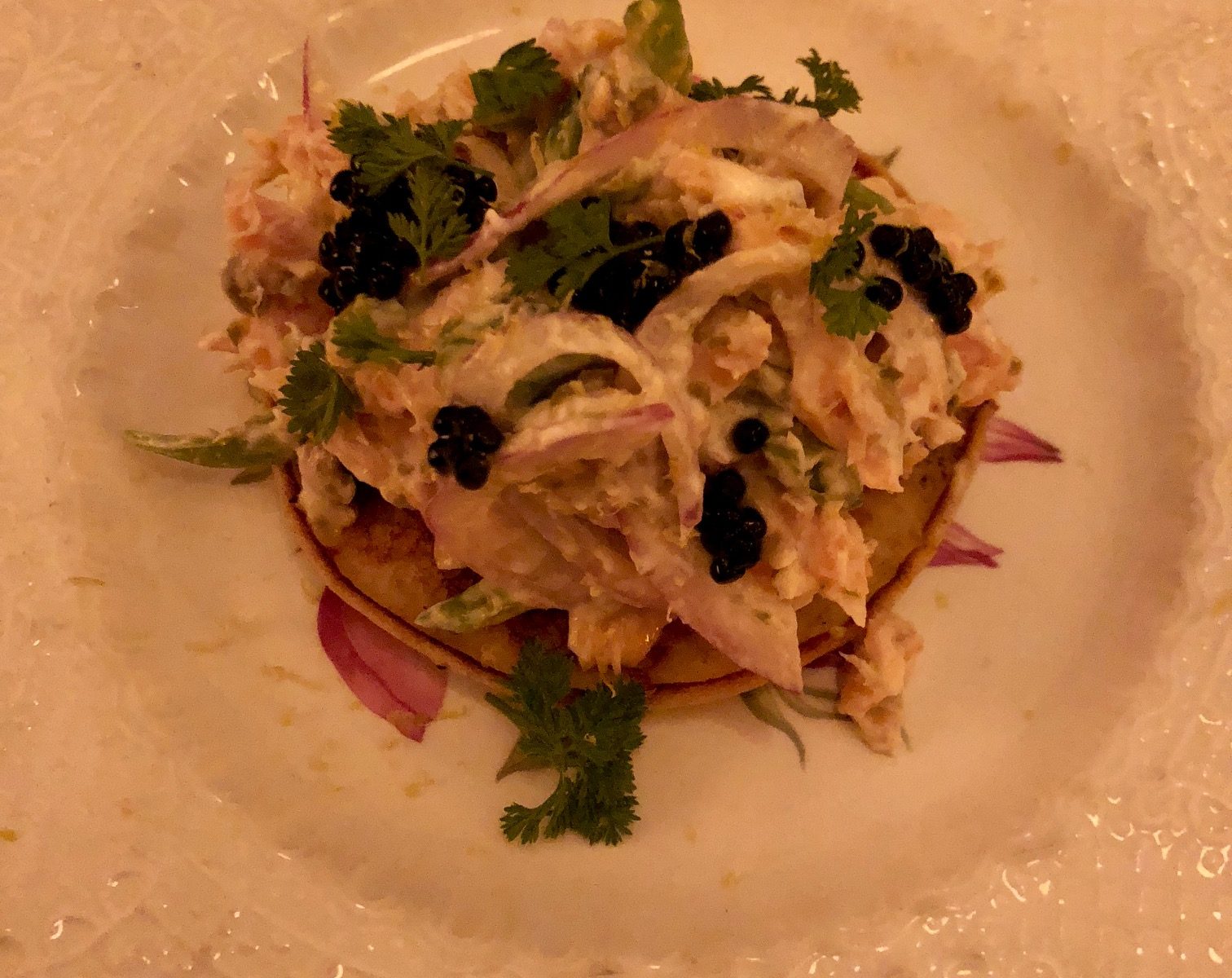 Le Swan, the hippest new spot from Jen Agg (Grey Gardens, Rhum Corner) is a rebirth of The Swan, the once-adored diner on Queen West, which closed in 2015. While the place is still brimming with nostalgie from yesteryear, Agg’s new concept for the space is “French diner”, complete with the elevated comfort food you’d expect from places like Aloette.

Earlier this year, Agg closed The Black Hoof, a Toronto institution that was known for charcuterie, off-cuts and game meats. When Le Swan opened its doors a few weeks ago, I was eager to see if had the potential to become Toronto’s new restaurant du jour.

Walking in for dinner on a Saturday night, I noticed many décor elements that had been preserved from the former Swan, such as old chestnut tables and wall panels, black and white penny tiles, and burgundy-coloured booths and bar stools. The aesthetic improvements, such as vintage pendant lighting and a bathroom overhaul (blooming wallpaper replaced once-black walls), were more subdued, yet still added Agg’s unique touch. A hand-painted swan logo also brightened up the window from outside.

Je suis tombée amoureuse with the ambiance immediately. Lighting was dim, highlighting the sheen of the glass bottles that stacked the bar. The vibe was casual, and fit right in with the neighbourhood. And the playlist… I wish I had Shazamed that! Everything combined set the tone for a great evening out. My guest and I settled into our booth, but failed to really sink in. While the seats were not plush and comfortable – like Aloette’s – I could swear that my posture improved during our two-hour meal as I could practically feel the upright wooden board behind my back. All of this didn’t faze me – because I was more curious about la nourriture.

In addition to a well-curated wine list featuring mostly Old World varieties, an edited menu of cocktails, boozy milkshakes and beers presented themselves in a small table-side stand. While the Absinthe coconut milkshake ($14) and Un! Deux! Pamplemousse! cocktail ($14) perked up my taste buds, I opted for some bold Syrah to complement the rich comfort food I was about to consume.

Speaking of which, Chef James Santon’s menu featured French bistro classics along the left column, balanced by diner-style comfort food on the right. Par exemple, the Salade Niçoise ($15) offered a counterpoint to the Cobb Salad ($17) and the Beef Cheek Bourguignon ($25) provided a more sophisticated alternative to the Meatloaf and Mash ($15). It was evident that both the menu and food offerings catered to a range of customers – from the fresh-out-of-university hipsters looking for a spot to grab a pint to middle-agers out for a romantic date sans les enfants.

With the guidance of our server, we chose four dishes from both sides of le menu. Through The Black Hoof, Agg made a name for herself by offering some of the city’s best charcuterie, and we wanted to try Le Swan’s version. In true diner style – marrying the old diner feel with the new – the charcuterie ($11) was presented on a swan-emblazoned plate instead of a wooden board, as one might expect. Spicy salami came flanked with grainy mustard and snappy gherkins. Luscious chicken liver terrine was a perfect match for the slices of crusty baguette. C’était très français, but I longed for a more generous portion and some more viande. Regardless, it was a tasty pairing for our vin.

Next up was the Smoked Trout Rillettes ($14), an eye-catching dish that was elevated with dots of caviar. Traditionally, a rillette refers to a method of preservation, typically made with pork, where the meat is heavily salted and then slowly cooked in its own fat. Once cooked, the meat is shredded and then reserved in the same fat to form a paste. I could tell that the fish had been smoked with the right amount of salt. Dressed with crème fraîche, onions and herbs, it sat on top of a chickpea crèpe – which was an innovative twist. This was determinedly old-school French cooking that had every detail in place. Next time, I’ll take deux, s’il vous plait.

Any French restaurant must produce Steak Frites ($32) with conviction, and Le Swan didn’t disappoint. The meat was perfectly cooked to medium and had been resting for the appropriate amount of time before it was served, as evidenced by the jus on the plate. The accompanying herb butter was divine. Don’t miss out on the fries, either. The pillowy white interior oozed from an equally enjoyable crispy golden coating – it was as if they had been injected with helium. For the price of this dish, I would have added a heartier helping of fries – after all, Le Swan is a diner.

For those who don’t want to use a steak knife, there are two salads and a side of beans ($16). The Cobb salad ($17), for example, appeared to be assembled in haste. A shallow layer of romaine was so sparse that parts of the white plate gleamed through, begging for a heavier dose of toppings (sundried tomatoes, pancetta, avocado, chunks of salmon). And, sadly, I couldn’t decipher if the salmon was canned. The only redeeming quality was the soft, silky poached egg. This salad could go back to the kitchen (desolée).

What often annoys me at most places is service that’s so fast-paced you know turning tables is more important to them than allowing their patrons to soak it all in; to savour the moment. By her actions, our server intuitively knew that we weren’t looking to rush anywhere. She let us sip our Syrah long after plates had been cleared, and popped in at just the right moments.

We paid our bill and both agreed that it was a great night. Nothing was over-the-top amazing, but it didn’t let us down either. On our way out, a quiet “thank you” echoed from the host stand. I looked back, and it was Agg. A self-made restaurateur, Agg is meticulous and hard-working – and that shines through at Le Swan. There were definitely pockets of excellence, but there’s still room for improvement. Hopefully I’ll witness this when I go back.

Here’s a little sweetness for your day! This is

Dreaming about this pasta from earlier in the mont