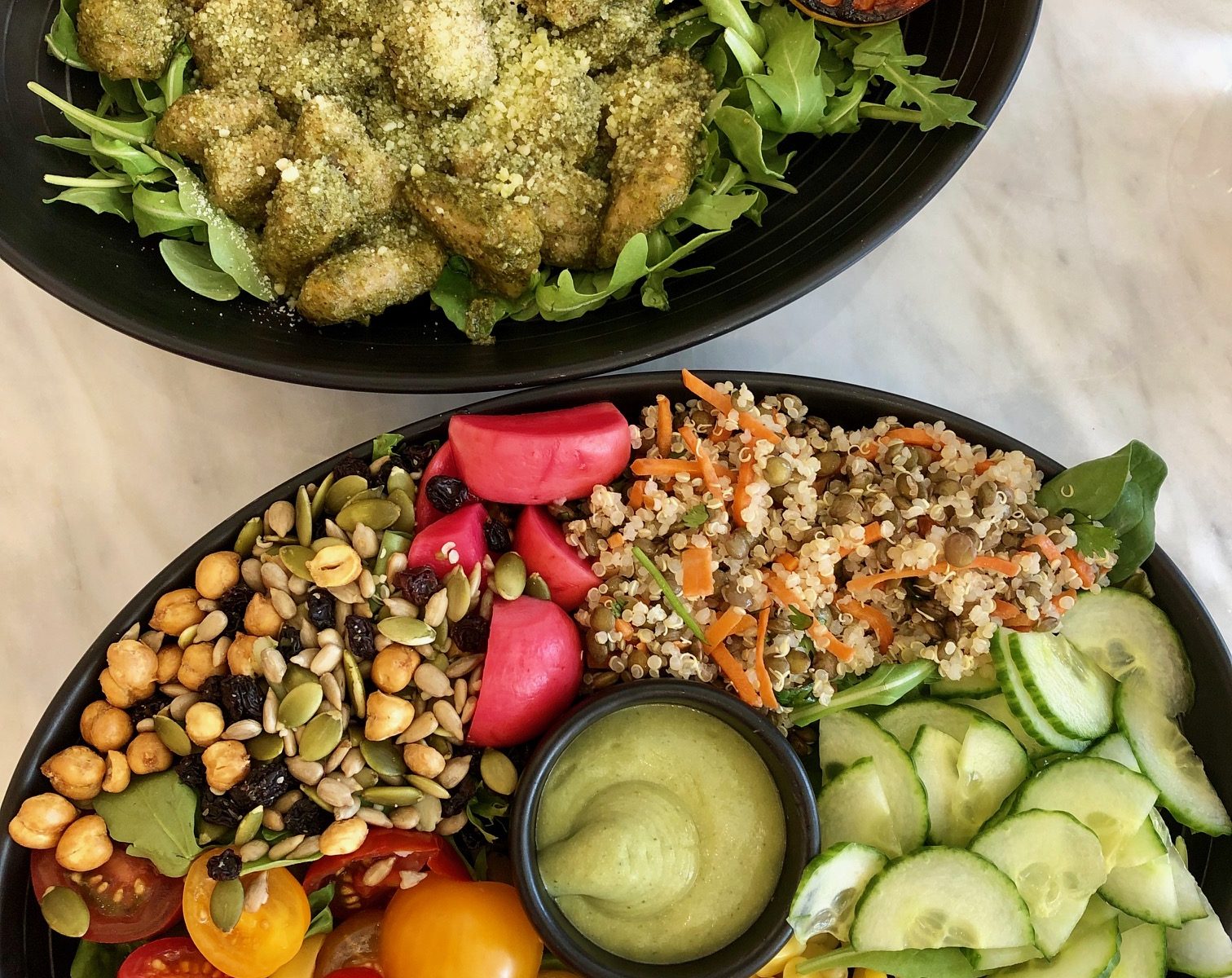 C’est pas une surprise that another plant-based restaurant has opened in our beloved city. LOV, which stands for local, organic, vegan, is a fast-fine brand by restaurateur Dominic Bujold that hails from Montreal. In September, LOV opened its first Ontario outpost on King Street West — the perfect spot to shine a light on this Instagram-worthy space that serves brunch, lunch and dinner.

Based on appearance alone, LOV didn’t miss a beat when it came to creating an otherworldly atmosphere. Its airy, relaxed ambiance was the type of environment that erased my worries, if only for a brief moment. Floor-to-ceiling windows flooded the spacious restaurant with natural light, and suspended plants, basket-woven light coverings and hues of green, rose gold and burnt orange transported me to a terrarium.

Other than being just a pretty face like many of its other King West counterparts, did LOV walk the talk when it came to its philosophy of serving “tasty and responsible plant-based cuisine which allows one to make choices that are healthful both for oneself and for the planet”?

To some degree, oui. Recycled materials were used for the menu, there was zero plastic in sight, and ingredients were local and organic. I appreciated the brief but educational introduction from our server, who offered to take our taste buds on a journey through the exclusively plant-based menu, which also had many gluten-free offerings.

Mon amie et moi selected a glass of white from the organic list to complement our lunch. There was a nice mix of local and global, as well as creative cocktails, mocktails, smoothies and hot beverages infused with superfoods.

Plant-based food often falls short when it comes to taste and originality, so my guest and I selected four dishes to share for a diverse sampling. From the mouth-watering Cheeseburger ($19) made with Beyond Meat and smothered in LOV sauce, to Truffles & Caviar ($20) – zucchini noodles topped with roasted oyster mushrooms, tapioca “caviar” and truffle sauce – it all seemed to sound just as satisfying as its counterparts carnivores.

Pour commencer, two carb-heavy dishes: Kimchi Fries ($8) and LOV Nachos ($18). Fries came loaded with kimchi, wakame and sesame dressing, which made them too soggy to enjoy. And, while I wouldn’t call these “healthy for oneself”, they were a treat. La même chosewith the nachos — corn chips, which were stacked with chili, black bean salsa, sour cream, squash and sweet potato sauce and “mozzarella.” The cheese was creamy, but didn’t attain the stretch of the Real McCoy. We also opted for some avocado puree for a $2 upcharge. Everything was served efficiently and tasted fresh, but the dishes were far too indulgent for what I’d typically associate with true vegan cuisine.

To balance out our carb-laden appetizers, we ordered a Power Bowl ($14) — a basic salad with a rainbow of colour from the mixed greens, arugula, cucumbers, cherry tomatoes, pickled radish, corn, quinoa, lentils, sprouted mung beans and seeds. The accompanying green goddess dressing was creamy and delicious, but it didn’t coat all the greens. So far, I hadn’t consumed anything I couldn’t make chez moi, but that all changed with the final dish.

The Gnocchi di Casa ($20), one of LOV’s signature items (and for a good reason), was the standout. A dreamy concoction of sweet potato and buckwheat formed the gnocchi, which was on par – both in taste and texture – with the traditional potato-based version. And if that wasn’t enough, the generous coating of nutty hemp-basil pesto and potato starch-based parmesan tied everything together. Portions were generous, however, and we both agreed that we’d over-ordered.

Pour moi, an element of surprise and experimentation goes part and parcel with veganism. After dining at LOV, I was not blown away by anything I tried, but there was nothing wrong with it either. Maybe I was expecting a plant-based burger oozing with “blood,” or watermelon ceviche kissed by the ocean’s saltiness. Both the ambiance and the service were wonderful, but I wanted LOV to push the envelope with its food instead of serving meatless renditions of comfort food. While the food we selected didn’t make me want to abandon my meat-loving ways, I’d definitely return for brunch — or, better yet, soaking up all its prettiness with a blue-lavender latte and a good book.

Focaccia and burrata = a match made in heaven. ❤

This, right here, is comfort in a bowl. 🍝 Cavat

Swipe to see some of the goodies I picked up from

This Thursday on the blog, I’ll share my takeout

Mondays are better with coffee. ☕️ And, I’m