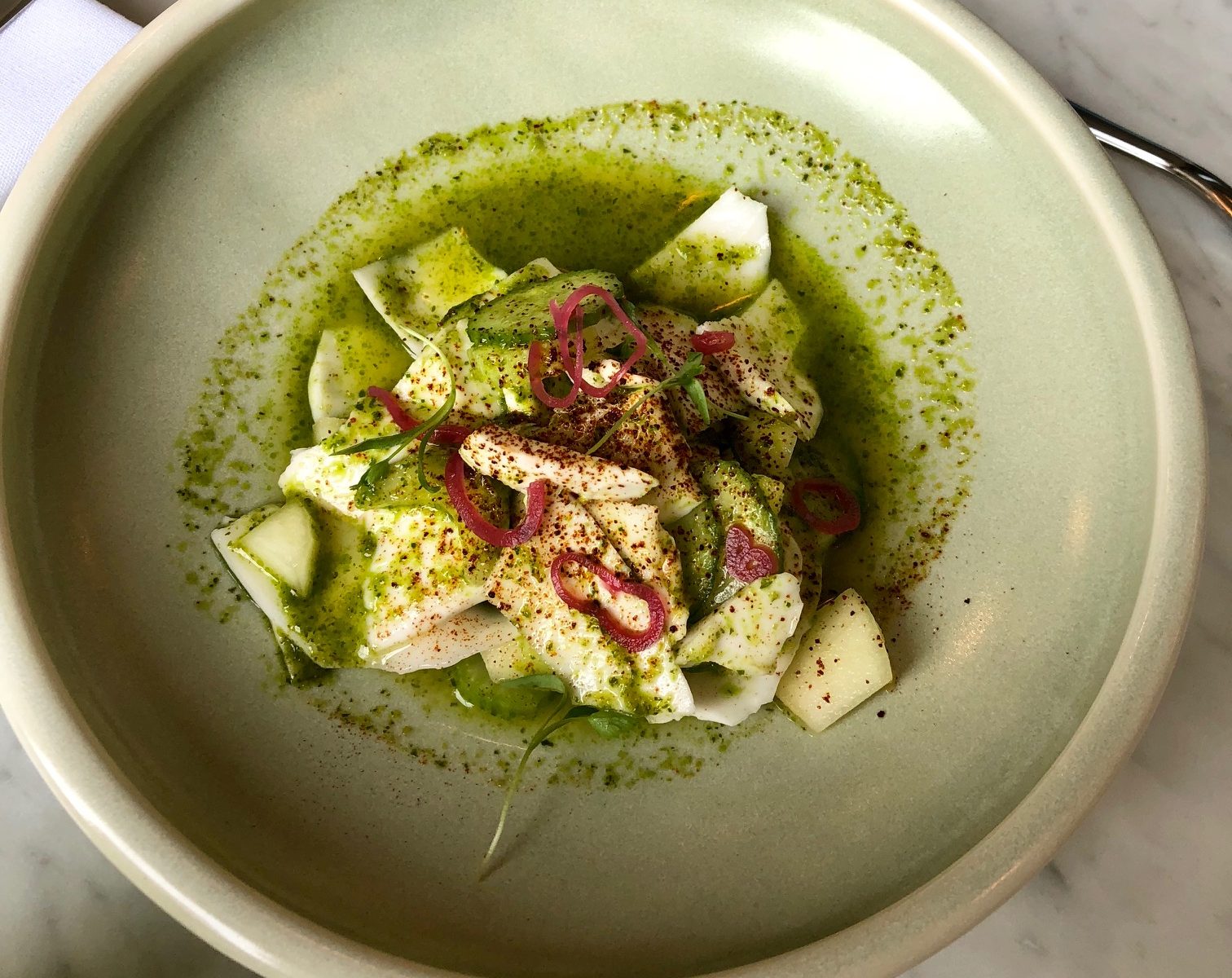 Is Toronto experiencing a cultural shift towards plant-based intelligence? It’s probable, with the growing number of exclusively vegan restaurants — from Mythology Diner to Planta. The newest addition to the vegan line up is Rosalinda, an innovative, Mexican-inspired  joint in the heart of the FiDi.

When I first heard about this restaurant (which was apparently a decade in the making), I was confident that it would be epic. Firstly, the people behind Rosalinda – Max Rimaldi, Jaime Cook (founder of Pizzeria Libretto) and Grant van Gameren (Bar Isabel, Bar Raval, El Rey, etc.) – are culinary masterminds. Secondly, who’s opposed to healthy, full-on-flavour vegan cuisine?

I decided to join a friend for lunch there one day. I was immediately impressed with Rosalinda’s epic curb appeal as I approached. Colourful blooms and greenery overflowed from planters that flanked the door. The interior was no different. With a serene ambiance that was inspired by Baja California and Mexico, it was a bright and airy space with greenery galore, a greenhouse-style roof and an appropriately fresh colour pallete. I was impressed by the strategic use of space for the 136-seat restaurant, which included a private room at the back. And the washrooms…they were made for mirror selfies (perhaps right up there with those at Grey Gardens).

Much like the easy, breezy vibe of the restaurant, the service was laid-back and attentive. Having only been open for a couple of weeks, Rosalinda operated smoothly – the sign of strong communication between front-of-house and back-of-house staff. Our server was well-versed in the food and drink offerings, and provided her recommendations when we asked. Right off the bat, I noticed the prices were un peu cher, especially considering the food was meatless.

I did, however, like how Rosalinda shone the spotlight on health with an impressive list of placebo cocktails – concoctions from the creative mind of Owen Walker, from the aforementioed Bar Isabel. My guest and I started  with The Up & Up ($9), a fizzy mixture of verjus, apple, cucumber and other healthy ingredients as well as a Strawberry & Tonic ($7), a Creamsicle-esque drink with a bitter finish. We said “santé!” and took a sip. Both drinks were delightful and refreshing, but the ice-to-drink ratio was off. There was too much ice, and they were overpriced for the portion.

The small food menu, designed for sharing, featured a selection of simple vegan plates, tostadas, and tacos topped with everything from roasted cauliflower, jackfruit pibil and prickly pear cactus. At first glance, the menu was reminiscent of Matthew Kenney’s Bar Verde in New York City.

We started with the Young Coconut Ceviche ($14), a marinated mixture of coconut, apple, celery and pickled shallot that offered some interesting textural components and pops of colour. The herb leche de tigre provided a fresh note on the tongue, but the overall flavor profile was too acidic to be enjoyed. An “A” for effort, but pass on this one.

The Rosalinda Burger ($18) was front and centre on the menu, and I was curious to see how it stacked up. From my first bite, I could tell that the chefs had experimented with flavor and texture – as if to emulate a real beef burger. While the patty didn’t break apart, this vegan burger didn’t “bleed.” What’s more, the white Wonder Bread bun that sandwiched the bland-tasting patty was underwhelming. For the price point, I expected something homemade. The side salad was an overly dressed mixture of greens and would have benefitted from a sprinkle of pepitas or sunflower seeds, for texture.

We also had the Chorizo Verde Tacos ($14 for two), which were accented with poblano, tomatillo and a cucumber pico de gallo. The soft shells were impressive in taste, but were a bit soggy by the time they arrived at our table.

The dessert menu was limited, with only three options. That said, my sweet tooth was satisfied with the Triple Chocolate Mousse ($10). Plenty of textural elements, such as cacao nibs, were folded into the mousse, which caught me by surprise. It was a lovely way to finish the meal, however, I would have injected some chili heat into the decadent chocolate mixture to remain faithful to the Mexican theme.

Rosalinda—from its name and ambiance to its food and drink—offered a cohesive experience while staying true to its vegan roots and regional Mexican influences, which were showcased in dishes like their sikil pak (a Mayan pumpkin seed dip) and salsa macha (a spicy condiment from Veracruz). While I wouldn’t rush back, Rosalinda is a healthy option for busy professionals or FiDi dwellers who are craving a fresh food in a serene setting.

Le rubrique de Madame Marie
1 étoile – Run. Before you get the runs.
2 étoiles – Mediocre, but nothing you couldn’t make at home.
3 étoiles – C’est bon, with some standout qualities.
4 étoiles – Many memorable qualities and excellent execution. Compliments to the chef.
5 étoiles – Formidable! Michelin Star quality. Book a reservation immediately.