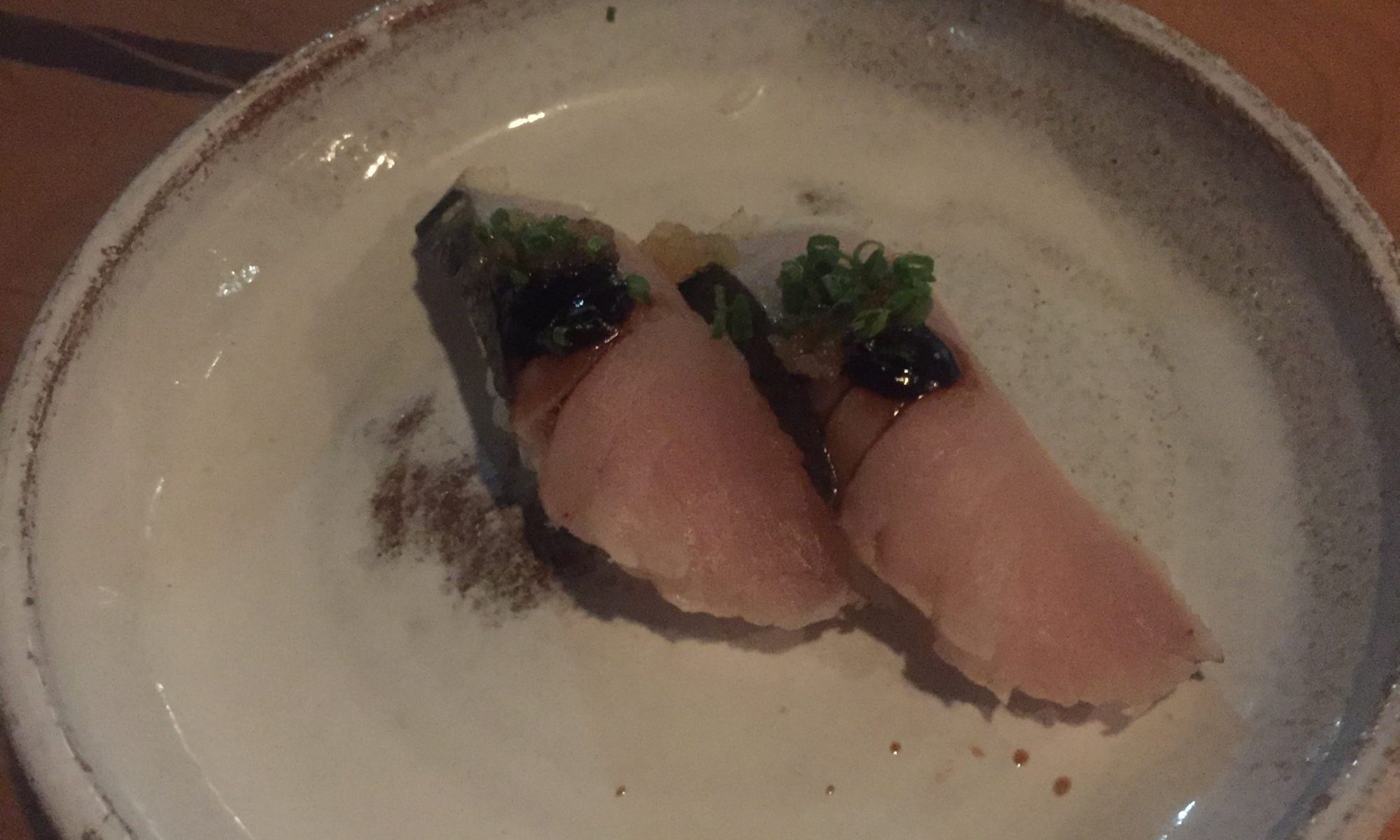 Skippa opened in July 2017 and has been making waves ever since. Appropriately so, since the sushi restaurant pays homage to chef/owner Ian Robinson’s dad’s sailboat. While Skippa’s website says it’s a restaurant serving “seasonal Japanese cuisine,” the focus is sushi, sushi, and more sushi.

Nigiri, the type of sushi with rice on the bottom and thinly sliced fish on top, tests any sushi maker’s skills. Shaping the rice into a perfectly cupped, tapered shape to hold the fish is an art in and of itself. Having lived in Japan and knowing how to make sushi from my own culinary training, I was looking forward to dining at Skippa.

Upon entering Skippa, the quaint space was decorated with anchors and reclaimed wood. However, the restaurant’s focal point was the sushi bar where Robinson crafted nigiri with finesse—passing them to amused diners and instructing them to “dip”/“not dip” and “eat in one bite.” I watched in awe as a team of lanky, bandana-clad sushi chefs moved skilfully around him, churning out delicate pieces of sushi and chanting “hai” in unison. The other highlight of the space was the unique communal dining table, which made for a très cozy vibe.

Perched at the L-shaped bar, I watched Robinson closely as I perused the small menu. He was hypnotic—deft in his movement and precise in his technique. You’d never know he had no formal culinary training (he apprenticed at Sushi Kaji).

The menu (complete with an old-school library date stamp) presented a selection of locally-sourced vegetable sides, sushi and sashimi. All items were offered à la carte (ranging from $4 to $10) or as omakase (chef’s choice). The night I was there, the omakase was priced at $45 and included onozi, Japanese New Year soup, and eight pieces of sushi.

Let me tell you…the Japanese New Year soup was not an impressive way to steer the ship out of the harbour. Limp vegetables floated in a bland miso broth. C’était triste.

But, it got better when the sushi parade began. Creative liberties were taken, and generous filets hung over perfectly shaped rice (which would be a “non-non” in traditional sushi-making). That said, there was still the right amount of authenticity.

While the menu was heavy on sea bream and tuna, all varieties were extremely fresh. There were two types of sea bream from New Zealand. The first was Goldeneye sea bream with house-made soy sauce. The second, far plainer, crumbled as I picked it up.

My taste buds were delighted with the torched mackerel. A dot of yuzu glaze complemented the garnet-coloured big-eye tuna. While the cut was a bit fatty, the taste was magnifique.

The lukewarm hand roll of chopped maguro (tuna belly)—presented inside out—was underwhelming in presentation but balanced with the right notes of spice. I wish the seaweed wrap (imported from the famous Tsujki Market) offered a crisper texture. It was a tad soggy when it arrived.

Hand-sculpted pieces of tamago (Japanese omelette) rounded out the omakase. Slightly smoky and a un peu sucré, it was a clean finish.

Throughout the omakase, each bite was nuanced, offering a modern twist on traditional nigiri. This differentiated Skippa from other spots like Yasu. Don’t go if you’re in the mood for a leisurely meal (there’s a two-hour time limit at the bar). The service, while attentive, was extremely rushed. I sometimes didn’t have time to eat the sushi before the next arrived. Skippa, let your guests savour the moment. The meal was also a bit pricey for the amount of food, at $45 per head. While the series of one-bite-wonders may not fill the stomach of a hungry gastonome, c’etait trop pour moi.

That said, if you’re looking for an innovative sushi adventure, hop onboard the Skippa and let Robinson steer you in a slightly different direction.