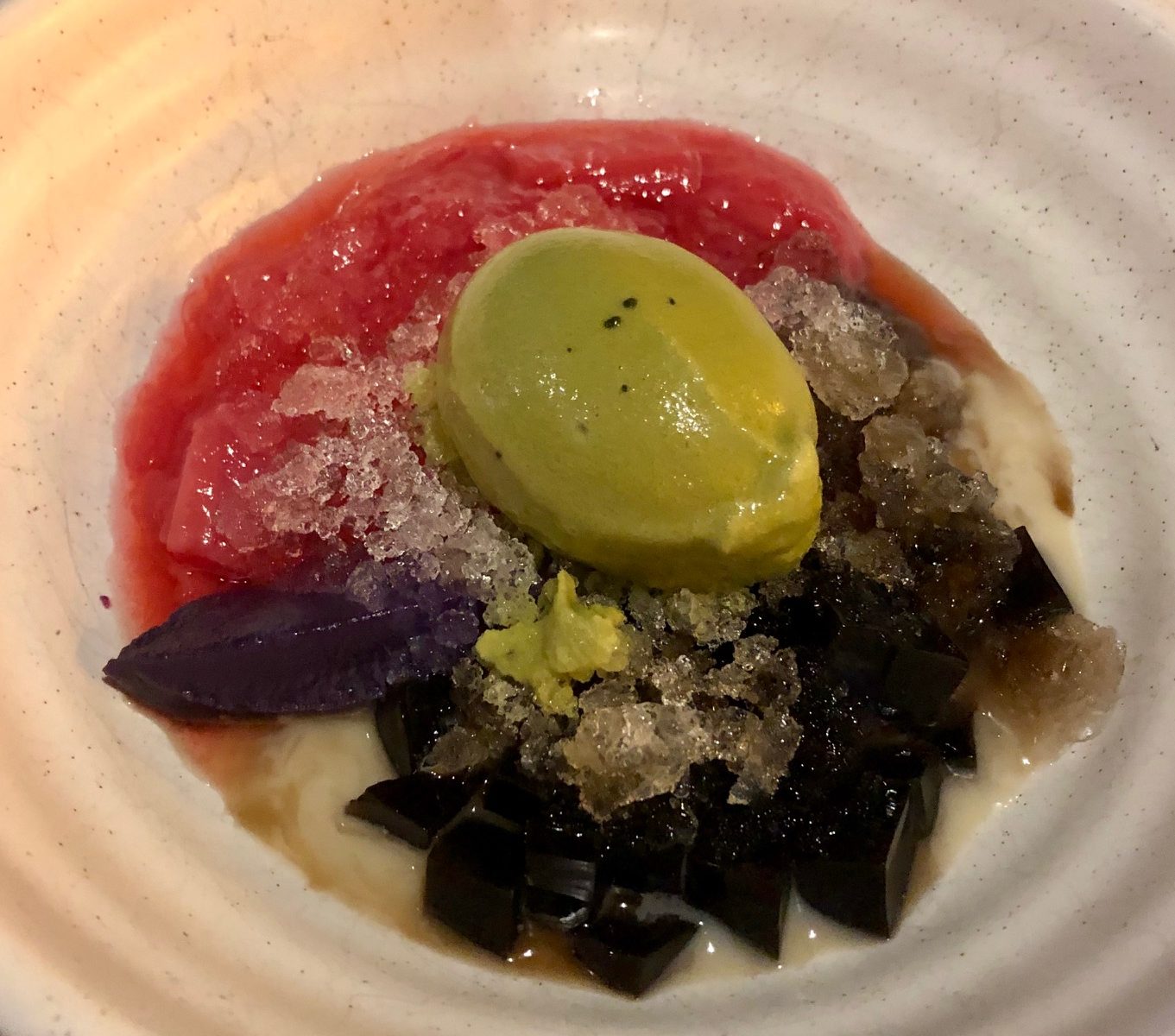 Gone are the days where vegan and vegetarian restaurant options in Toronto were limited to the likes of Fresh and Hibiscus. A vegan in Toronto can now delight in more than just a basic black bean burger or a tofu stir-fry thanks to the openings of more upscale restaurants dedicated to vegan fare, like Rosalinda and Planta. Planta’s newest and swankiest outpost on Queen Street West, aptly named Planta Queen, takes plant-based cuisine to new heights with its stunning décor and an Asian twist.

Co-owners David Lee, David Grutman and The Chase Hospitality Group have transformed the former Nota Bene space into a plant-based paradise that’s worth a visit. Don’t let the word “vegan” deter you.

I met a friend for lunch one day and was immediately impressed when I entered. Front-of-house staff made me feel bienvenue. Although there was a comforting familiarity to the new restaurant, aesthetic enhancements gave the space a refreshing lift. Lantern-like lighting fixtures, Japanese motifs, dark wood, a rock garden with trees and custom ornate wallpaper contributed to the restaurant’s Asian-inspired feel. The open, dimly-lit space made it ideal for weekend drinks, a business lunch or a more romantique occasion.

From the moment I took my seat in the second-level dining area, I was whisked away to a Zen-like escape. A neatly folded napkin, chopsticks and a crystal glass made Planta Queen feel more like a sophisticated older sister than its Yorkville counterpart. While waiting for my guest to arrive, I ordered a glass of sparkling rosé, although I was tempted by the cleverly-named cocktails, such as the Sake Sangria or Ho-Lee Chit ($14 each).

Planta Queen sits on the corner of Queen and University — a prime spot in Toronto’s downtown core. With reservations solidly booked as well as steady pedestrian traffic, it was good to know that they’re open seven days a week for lunch and dinner. They also offer a dim sum brunch on Sundays.

David Lee’s menu was an accurate reflection of what I’d expect for this establishment and was divided into seven sections: Nigiri, Maki, Small Plates, Salads, Dumplings, Noodles and Rice, and Wok. Mouth-watering dishes with flavourful ingredients — coriander, XO sauce, chili, shiitake mushrooms, truffle and hakka noodles — transported me on a whirlwind tour of Japan, China, Singapore, and Thailand. While everything was vegan, there were less gluten-free options than I’d expect. Many dishes contained fried components. Delicious? Oui. Healthy? Non. With the help of our server, we selected some items to nosh on from each section.

Planta Queen’s Spicy Tuna Roll ($15) looked just like the real thing. Tuna was swapped out for ahi watermelon, and I had to do a double-take when I saw it. The texture emulated raw tuna to a T. In terms of taste, it had sweeter notes than a typical maki roll with fish. Sticky rice surrounded a tightly wrapped package of tempura, spicy aioli and pickled watermelon. It was absolutely divine, and we could have polished off another roll. The question now is: is vegan sushi here to stay?

Unfortunately, the Mango and Coconut Salad ($13) was far less impressionante. Carelessly sliced and overly ripe mangos were paired with young coconut meat in a shallow dish. A hefty serving of peanuts concealed the star ingredients instead of letting their vibrant colours shine through. While I delighted in the tropical notes of this dish along with unexpected hits of fresh coriander and Thai basil, there was room for more creativity given the price point. Anyone could have thrown this one together à la maison.

Uncle Bam’s Spring Rolls ($10.75) arrived at the perfect time — when we were just polishing off our first glass of bubbly and I was craving some deep-fried goodness. Other than being piping hot, the chow mein, coriander, and five-spice were flavourful. The accompanying plum and chili dipping sauce was familiar in all the right ways. Instead of being a Chinese take-out spring roll you’d expect after a late night out, these were more sophistiqués.

The deep-fried theme continued with General Lee’s Cauliflower ($15.25), cleverly named after Chef Lee himself. Tender florets were breaded and fried, then lightly glazed with a caramel-sweet ginger sauce and topped with scallions and sesame seeds. For the portion, it was un peu cher. Chef Lee didn’t make the amateur mistake of drowning the cauliflower in sauce and making it soggy. There are only a few other cauliflower dishes I’d recommend in the city, including the one at Carbon Bar, and Planta Queen’s takes a close second.

After a heavy lunch, we decided to finish with a little something sucré. At first glance of the dessert menu, the Halo Halo ($12) intrigued us. In Filipino culture, halo-halo is a dessert that blends ingredients from the country’s diverse cultures. Planta’s version did just that — with a quenelle of grassy matcha gelato, vibrant ube (purple yam), gelatin, condensed coconut milk, and fruits. It was an elaborate, surprising and refreshing way to end our meal even though it wasn’t my typical choice.

Following a not-so-pleasant experience at Planta Yorkville a couple of years back (read my review here), I was très hésitante to try Planta Queen, but I’m glad I gave it a chance. It’s now my restaurant préféré in Toronto for vegan cuisine that offers far more than a basic burger and fries or some version of a quinoa bowl. It not only served elevated food in a swanky environment, but had a vibrant pulse during the day. While I enjoyed most of the meal, Chef Lee is not on par with some of the plant-based industry leaders, such as Matthew Kenney. Planta Queen has room to grow, but I still appreciated its ability to provide solely plant-based cuisine with an Asian flair.

Grilled salmon and polenta purée. Have you been t

La Terrazza in Rome — one of the most underrated

I could eat this by the pint... White chocolate ic

The take-home butter tart, part of the latest tast

Are you feeling crabby? This deep fried crab wrapp

This risotto from Michelin 3-starred @ristoranteil

Perfectly seared and ready to devour. Do you like