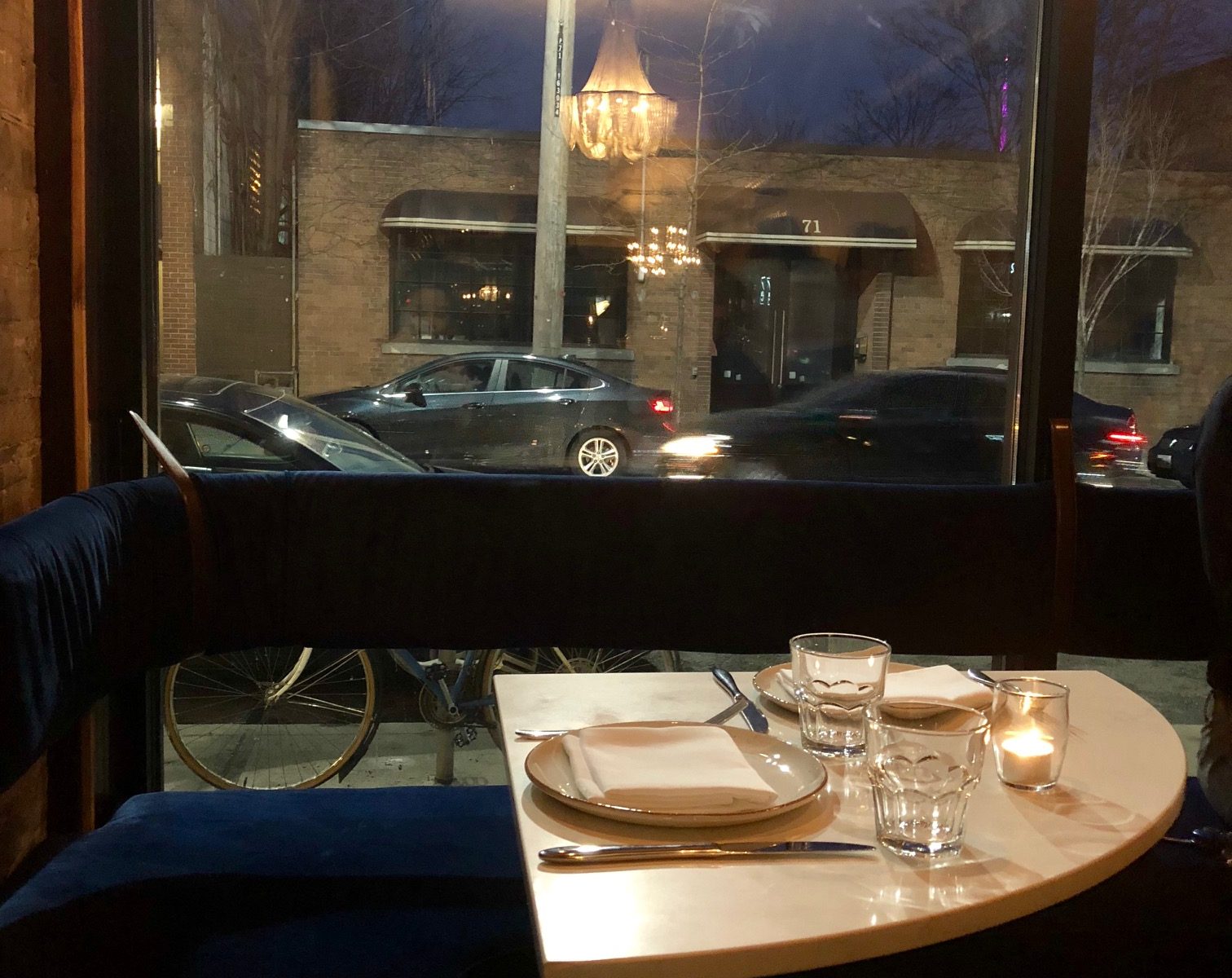 À mon avis, some of the city’s best restaurants are the brainchildren of the Peer to Peer Hospitality Group (Cava, Chabrol, Atlas). Whenever  I’ve dined at any of these places, ma bouche has always been impressed. The newest addition to the Group’s all-star lineup is Tanto, an Argentine-inspired restaurant.

Located on Ossington Avenue, amongst the expanding empire of hip restaurants, Tanto is the delicious outcome of Chef Julian Iliopoulos’ travels through Argentina, Spain and Italy. The narrow restaurant with an open kitchen was not a kitschy ode to these countries—it was understated and elegant. Distressed brick walls lent character, tufted blue velvet banquettes gave me a cushy seat, and a tasteful crystal chandelier provided a warm glow — making it the ideal spot for une soirée avec votre petit(e) ami(e). While our server wasn’t as warm as the lighting, she was attentive and was well-versed in wine. We ordered a bottle of Spanish Malbec to whet our palates.

One of the elements I enjoyed most about Tanto was the shareable plates. Iliopoulos honed his tapas skills while at the helm of Cava, and his range of culinary knowledge and talents are well showcased here. Some entrées kicked Argentine comfort food up a notch, like fall-off-the-bone short ribs with verdant chimichurri ($32). Others paid homage to Italy, such as chicken Milanesa with sweet potato and smoked piquillo pepper ($17).

For something to nosh on before our mains, we ordered the churros and empanadas. Churros typically connote a sweet pastry with a crispy exterior. Tanto’s version of churros ($8) used potatoes as the base. They were deep-fried sticks of goodness! The pillowy churros provided a melt-in-your mouth texture, and the side of piquillo honey brought back the sweet familiarity of traditional churros. These were a highlight.

Throughout the years, many cultures have put a spin on empanadas—a staple in Spanish and South American cuisine. While Tanto’s smoked ricotta empanada ($7) contained no meat, la cuisine nailed the authentic smoky flavour and crimped dough, which they deep fried rather than baked. Plated with an oversized plastic bottle of Tanto’s hot sauce (like one you’d buy at the dollar store), I found the presentation to be uncharacteristically low-brow and tacky. A small side bowl would have been more à propos.

Beef is usually the star protein at any Argentine restaurant, and I had to try some. The bavette (flank) and sweetbreads didn’t appeal to me, so my guest and I opted for the short ribs with chimichurri and grilled lettuce ($34). Tanto’s grill, fuelled by wood fire, lent the perfect whiff of smoke to the short ribs without being overpowering. As tasty as the perfectly rosy ribs were, we enjoyed more innovative menu offerings, such as the leek “noquis.”

The leek noquis ($28) — a playful rendition of potato gnocchi — are Iliopoulos’ nod to Italian cuisine. And Italy would be proud. Instead of pairing these delectable bites with traditional tomato sauce or sage brown butter, its flavours were elevated with earthy maitake mushrooms and a healthy topping of Taleggio—a semi-soft cheese with fruity notes. The dumpling-like pasta was almost trop mignon to eat. The dish was decadent and, by far, mon plat preferé.

Throughout our meal, the bottle of full-bodied Spanish Malbec complemented the robust flavours of the short ribs and the creamy noquis.

After dining at Tanto, I can see why Toronto Life named it as one of the city’s best new restaurants in 2018. Iliopoulos and the Tanto team did an excellent job at showcasing Argentine cuisine and beyond, providing patrons with innovative flavour combinations and culinary finesse. While the tab added up quickly, I would go back without hesitation. Next time, I’ll have two orders of churros, s’il vous plait.