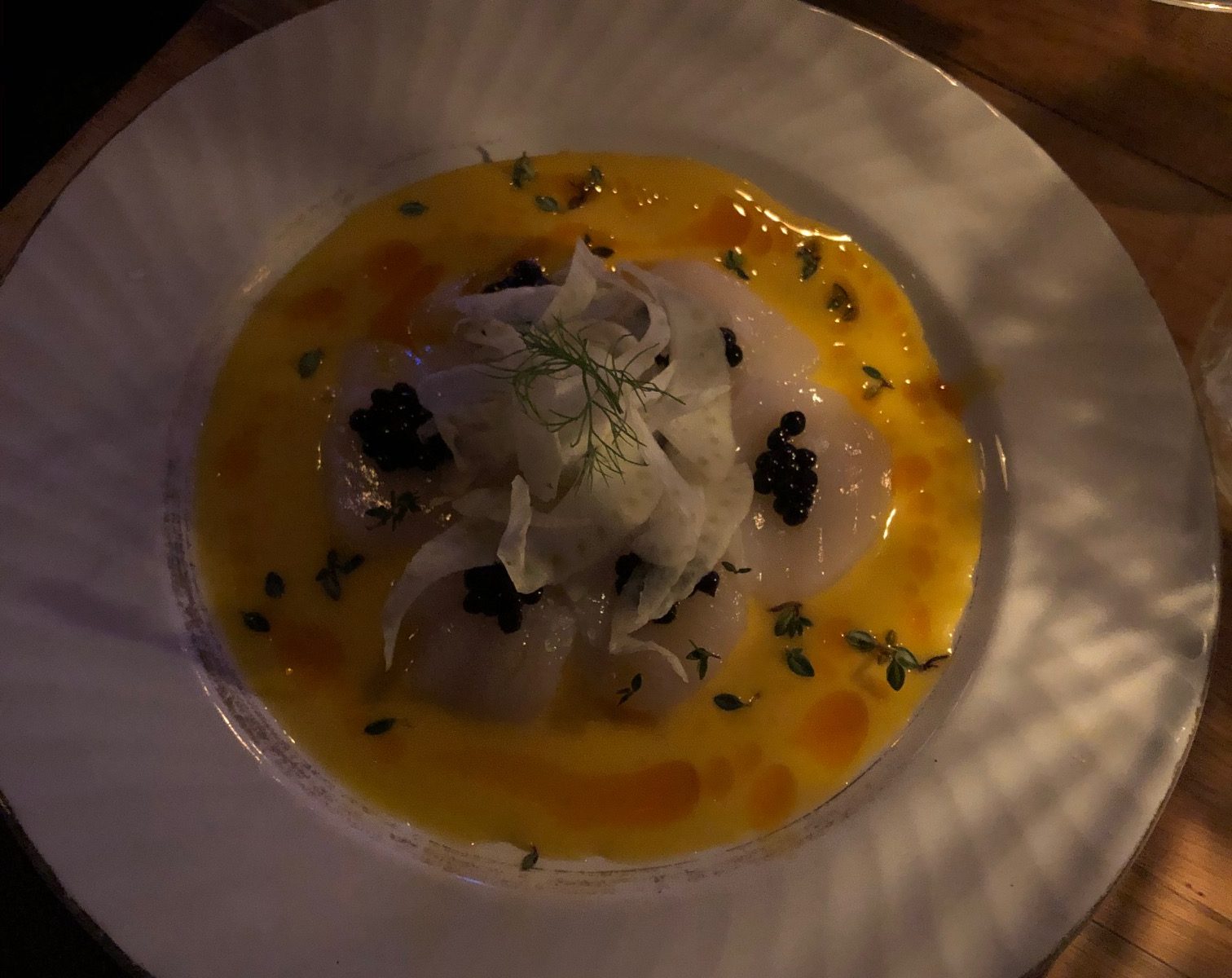 Last November, one of Toronto’s beloved French restaurants, Chantecler, caught fire. The devastating aftermath resulted in its sudden closure. While its closing could have resulted in a tragic ending, Chantecler was reincarnated through a brand new pop-up concept, Le Phénix. And, its name is à propos considering the phoenix is the ultimate symbol of strength and renewal. Conveniently located a stone’s throw from Chantecler, Le Phénix celebrates French cuisine in a familiar and intimate atmosphere. It will be open until August 2020.

As a regular at Chantecler, I was curious to see how the team’s new restaurant concept translated. Le Phénix took over the former IST Eatery — a gritty looking building with the same Parkdale industrial vibe as Chantecler. After a record-breaking speedy reno led by owner Jacob Wharton-Shukster, they were open for business within about nine weeks.

The space is much larger, but they preserved the vibe intime with an open kitchen at the back — something I always adored about Chantecler. Chef Peter Robson (La Banane, Enoteca Sociale) has incorporated some of Chantecler’s classic menu items, with a few new surprises. And, la carte des vins – popping with Old World bottles – is just as impressive. It’s one I could sift through (and sip on) for hours.

There’s something for tout le monde in all sections of the menu. My guest and I ordered two dishes from the small plates, one big platter, one side dish, and one daily special.

Pour commencer, we started with two cheese puffs ($2 per piece) — almost as delicious as they were adorable, a cheese pastry stuffed with a truffled-cheese sauce that oozed out like a soft-boiled egg yolk. The umami-rich inside was far better than the overcooked pastry. That aside, they were a perfect bite to start the meal.

We countered our rich and cheesy bites with the winter salad ($12), a glorious mixture of radicchio, frisée, pear, and espelette pepita. If I could dream up my ideal winter salad, this would be it. It was a beautiful harmony of flavours, and I especially liked the creamy shallot vinaigrette that coated the greens parfaitement.

The scallop crudo special came highly recommended by our server, who said it was better than the menu staple, the tuna confit ($16). Parfois, a special can be a letdown, but this one definitely wasn’t. Halved bay scallops sat in a shallow pool of vibrant citrus jus, their delicate white flesh emerging from the orange backdrop. Mandolined fennel and its fonds were piled on top and gave the dish a pleasing appearance, as did the balsamic pearls. These decorative spheres not only lent to a visually pleasing plate, but they were also filled with a surprising pop of spicy balsamic vinegar, which added some acidity to the dish.

A restaurant fire can be an emotionally turbulent time for a business, and the next dish was Robson’s culinary translation of the fire. The poached halibut from B.C. was a new dish that could be ordered in a half portion ($24) or a full portion ($40). We shared the full portion, and almost immediately regretted it. The smokiness from the leek-ash topping was far too overpowering and off-putting. Even the lemon beurre blanc didn’t save this dish from the proverbial fire. It detracted from the meaty halibut (which was actually cooked perfectly) and was served lukewarm. There was one redeeming quality of this dish — the salsify chips, which provided a satisfying crunch.

For a side, we shared the Brussels sprouts ($9). The generous portion was drowning in oil, but I adored all the textures from the crispy skin, bacon, and walnuts. Miam miam! By the time we’d finished our repas, my stomach felt like it had a leftover pool of oil from a deep fryer, so we passed on dessert. Although, if I return again, the chocolate-hazelnut terrine ($12) with Maldon salt and white chocolate would be first on my list.

Much like Chantecler, Le Phénix is a restaurant with a great vibe and irreproachable, genuine service. While there were some growing pains in terms of the menu, overall, I really enjoyed the meal. If you venture to Parkdale, be sure to pop in before this pop-up disappears!