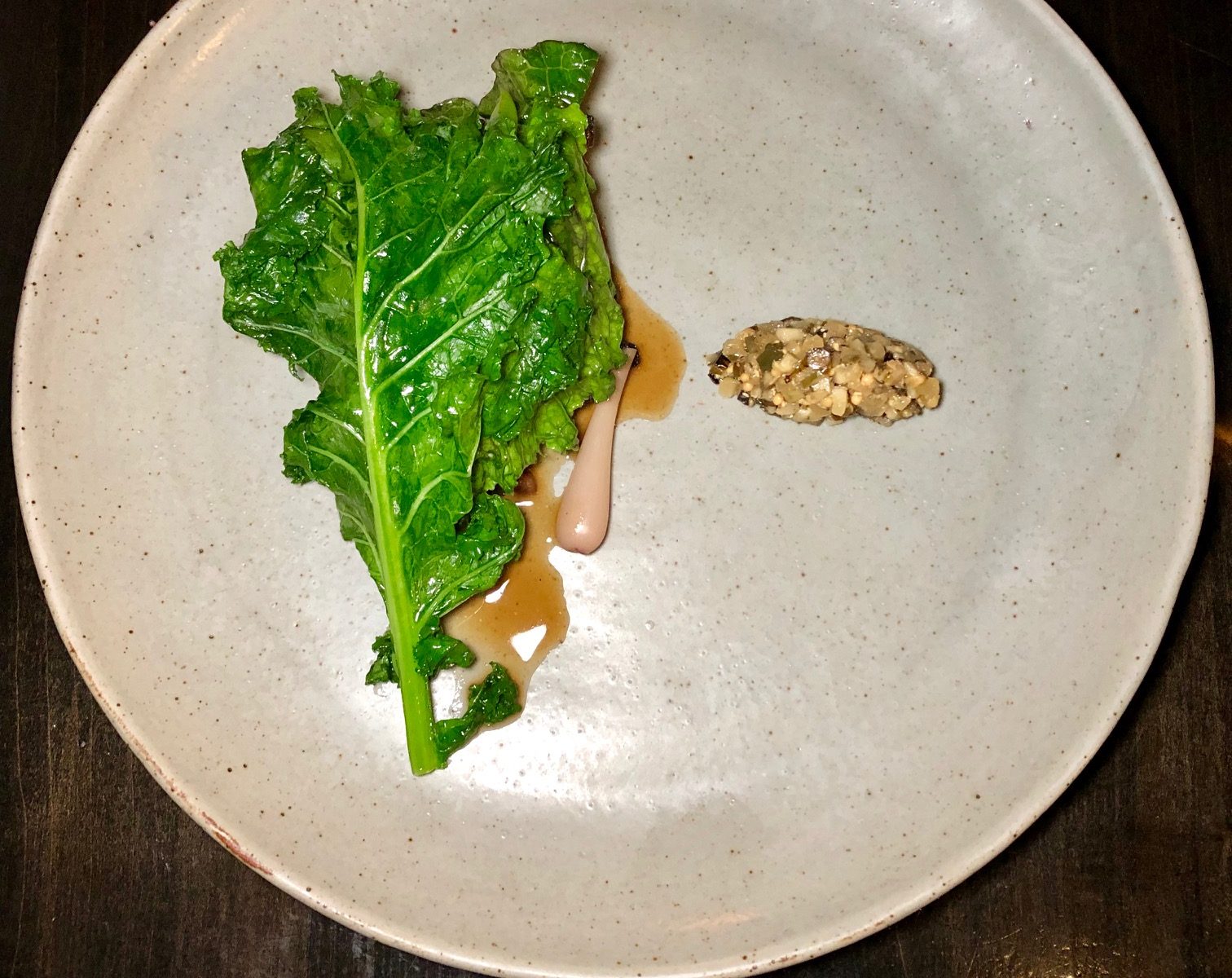 When you set foot in Actinolite, an unassuming corner restaurant that blends into its surroundings on Ossington Avenue, your senses might not know what they’re about to experience — in the best way possible. Chef/owner Justin Cournoyer literally invites you into his home (he lives on the top story of the restaurant) to showcase local, seasonal ingredients that depict the vast Canadian landscape in edible form.

From its name to its tasting menu format, Actinolite is rooted in nostalgia. It’s named after the small town where Cournoyer spent his summers, and where he started foraging as a young boy and experimenting with treasured finds from the forest.

Although the restaurant has been open since 2014, it’s not until recently that it’s been given the accolades it deserves. Par exemple, Toronto Life finally listed it at number four in its 100 Best Toronto Restaurants.

I made an early weeknight reservation a few weeks in advance as my guests and I wanted time to savour the chef’s tasting menu (eight courses for $110, and an optional wine pairing for $65). We arrived just as it opened. The restaurant’s ambiance was unfussy, but inviting. Dark wood and exposed brick worked well with the blue-hued paint. Antiques were interspersed with contemporary furniture and modern light fixtures. It all worked, and made us feel at home. In fact, I felt like someone was wrapping a warm blanket around me — quel confort!

The wine list revealed a selection that extended beyond the Old World. Most local selections came from PEC and Niagara regions, and we decided it would be à proposto order from a regional vineyard. We selected a bottle of merlot from a Niagara winery, Southbrook, and browsed the menu, which looked intriguing. I was curious to see how some elements would translate from earth to plate.

A born storyteller, Cournoyer is passionate about his craft and wishes to share it with Toronto. He’s not only the chef and owner, but takes pride in serving his patrons and sharing his vision. Standing table-side, he explained the chef’s snacks with a smile and expressive hands. Smoked halibut, carrot and lichen arrived on a flat stone from the fields of his hometown, Actinolite. Not only were they a pleasant introduction to showcase the restaurant’s philosophy, but they were delicious. The accompanying red fife sourdough with miso butter was absolument parfait.

The next dish gave a whole new spin on a rather dumpy winter vegetable: rutabaga. Cournoyer served it in a deep bowl, its threadlike texture resembling spaghetti squash. Faint undertones of walnut and mushroom elevated its earthiness, and a creamy whey base transformed it into a dish that was more like a ramen. Wooden chopsticks were the perfect utensil pour manger, and added an Asian-inspired twist.

Cournoyer reappeared with a vibrant plate that included une seule oyster from B.C., a variety called “beach angel.” I sucked back the plump, luscious oyster and enjoyed le gout océanique. Its minerality combined with the splash of gooseberry oil made its freshness even more apparent. Next to the oyster was what Cournoyer referred to as “juicy roots” — a mélange of pickled and fermented vegetables that he and the team collected during peak season, then preserved. Cleverly disguised as a fruit salad, the “juicy roots” were a stark yet interesting contrast to the oyster. Our table agreed that the beet was overly acidic and the pieces could have been smaller to prevent such an overwhelmingly powerful bite.

I winced when the next dish arrived: raw venison with juniper berry. Sourced from Quebec, the bright red flesh starkly contrasted with the white bowl. Cournoyer explained that a deer’s diet is rich in juniper berries, which is why he paired them together. Delicate garnishes of berries, moss and spruce made it feel like I was reconnecting with my primal roots. While venison is an acquired taste, I appreciated how it expanded my palate. If beef Carpaccio is quintessential Italy, Actinolite’s venison dish was uniquely Canadian.

Halibut cheek with spring cabbage and white spruce broth had winter comfort written all over it. Yet, its simplicity in presentation made me wonder if it would be satisfying. It was all that and more. The meaty halibut cheek complemented the subdued spruce notes from the broth.

The next dish was a testament to the strong relationships Cournoyer has cultivated with his suppliers — a cornerstone of Actinolite’s philosophy. As he presented a single potato, he joked that this was “Greg’s potato” because it was grown by Greg Hill, a farmer from Cobourg. Une seule bouchée confirmed that this pomme de terrewas la crème de la crème. The skin’s waxy texture combined with the just-cooked flesh were elevated by a reduced whey sauce and wilted spinach. This dish made me appreciate the austerity of local ingredients as they are — and the heartiness of a single, perfectly-cooked potato.

An intricately presented beef dish arrived next, concealed under some greenery. Its crusted exterior peered out from under curly stalks of garlic scapes. On the side, a neat pile of diced pickles and pickled onion added some acidity to balance the richness. While the cut was overly fatty and lots went to waste, this was the way our ancestors would have eaten it. It was on point with the whole philosophy and the portion was généreuse for a tasting menu.

The dessert was whimsical and put tayberries — a tart fruit which is a hybrid of a blackberry and a raspberry — into the spotlight. A cloud of meringue dusted with bee pollen and lavender floated on top of the juicy berries. Together, the two components were absolutely divine. And if that wasn’t enough, along came a side of brown butter doughnut holes with black currant jelly. After finishing, my bowl looked like it had gone through the dishwasher.

On top of a truly remarkable menu, what I witnessed in between courses was equally impressive. Cournoyer is humble and endearing — and a true team player. Throughout our meal, he folded napkins when guests left the table. To my surprise, I saw him changing a light bulb in the washroom just as doors opened, ensuring everything was ready for guests. It’s his attention to detail that transcends into the whole experience, making it a restaurant that you’d proudly recommend your amis, and one you’d revisit as well.

Actinolote’s tasting menu is full of surprises and delights for the senses — it’s like you’re walking through a forest, with Cournoyer as your forager guide and chef. As a whole, the menu has a full spectrum of tastes and textures. Some more pleasing. Some surprising (like the chocolate “rocks” at the end). Some comforting. It’s this range that makes the whole experience complete, and utterly enjoyable. Cournoyer brings primal knowledge to fine cuisine in a way that persuades diners to open their minds, and to contemplate the story behind what’s on their plates. He captures Canadian cuisine so succinctly and is gifted in his craft. Actinolite’s tasting menu is far greater than the sum of its parts, and it’s one that you’ll remember.