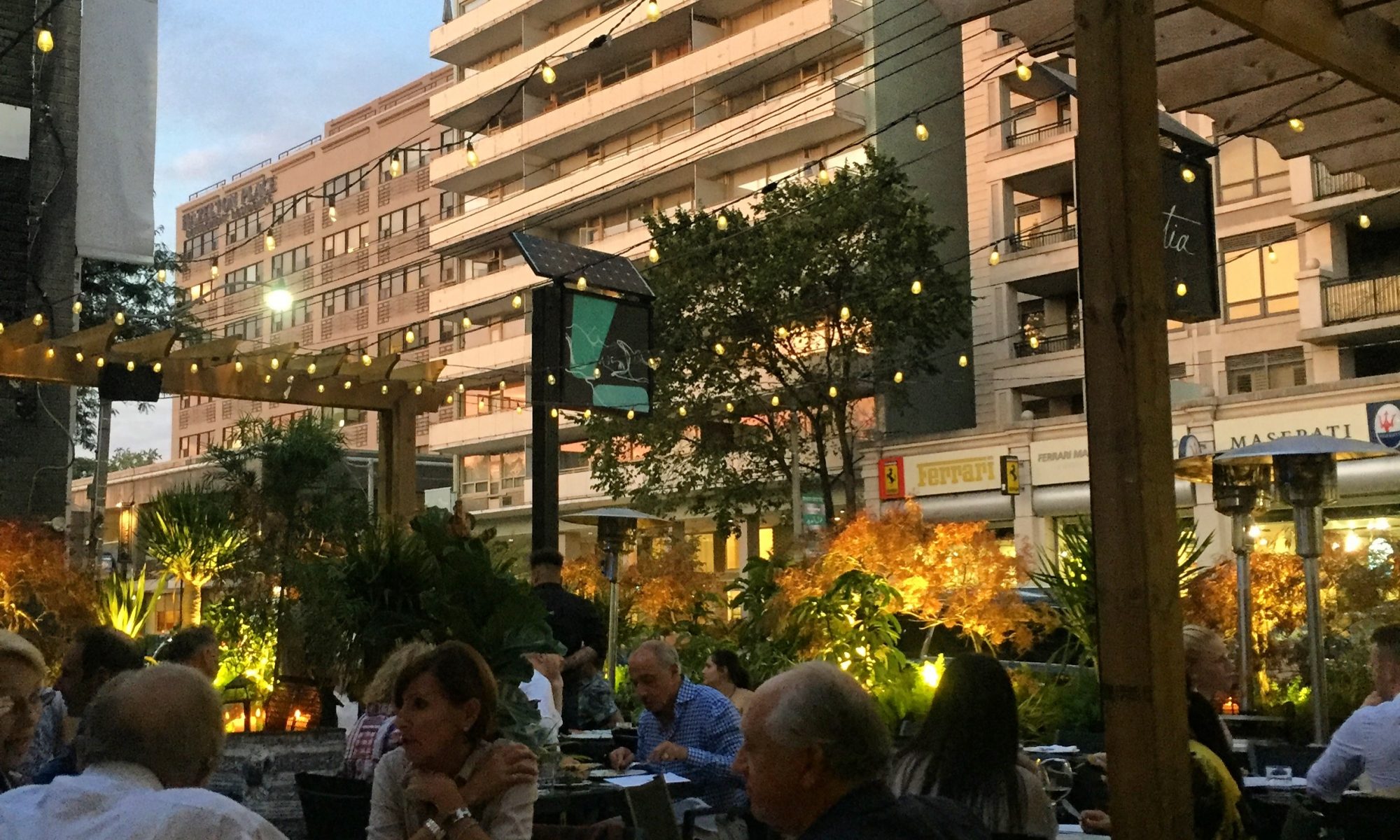 A couple years ago, I celebrated my birthday at Nao, an upscale Yorkville steakhouse. It was a happening spot that socialites flocked to for an evening of fruity cocktails and surf and turf. The food quality was standard for a steakhouse—falling somewhere between Harbour Sixty Steakhouse  and The Keg. When the nearly identical STK opened its doors around the corner in October 2016, Nao’s co-owners Charles Khabouth and Hanif Harji (La Société, Figo, Weslodge, Patria, Byblos…and more) had already plotted their next move. Their solution was simple: rebrand.

Nao was reborn as Estia in May 2017. As elegant as its name, which comes from Hestia, the Greek goddess of the hearth, it’s a welcome contrast to its predecessor. My family dined there on a Monday in late September. The lingering summer temperatures made the lush patio a perfect spot to catch up and people-watch. Inside, the dark, mahogany-rich space that was formerly Nao had been replaced with Persian rugs, teal accents, merlot-coloured banquets and decorative amphorae. Très chic.

As for the food, it’s inspired by Greece, southern Italy and Spain. Executive chef Ben Heaton (The Grove, La Société, Figo) and chef de cuisine Brent Maxwell (Canoe) have successfully tied these regions together in a delicious menu that’s made for sharing. If that doesn’t sound tempting enough, the cured meat, cheese and pasta are all made from scratch.

While our server was a bit odd (an invisible wasp stung him mid-service), he answered my questions professionally when I grilled him like meat on an open flame. He told us that Estia embraced a local approach, sourcing products from around Ontario. The fish, on the other hand, was a daily selection from Greece and New Zealand.

Ordering fish on a Monday is usually a no-no in my books. I worry that it’s left over from the weekend supply, but the server assured me that it was just flown in. After finishing my Cucumber Gimlet—a crisp counter to the humid air—we ordered a selection of items. From the starters and sides, we chose the halloumi, baby gem salad, calamari, fries and braised cauliflower. Although the prices seemed steep, the portions—coupled with the unique ambiance— totally justified them.

The halloumi, ($16) prepared with warm truffle honey, roasted grapes and toasted walnuts, was a standout dish. It was the perfect way to pique my appetite before the mains. My only complaint was that the truffle seemed absent. I can’t get enough of cheese and roasted grapes since trying Campagnolo’s signature starter. They still do it better. The calamari was lightly fried and beyond fresh as well.

House-made feta, crisp pita, olives, fresh basil and roasted garlic vinaigrette tied the baby gem salad ($9) together nicely. The salad section was the most tempting and I would try something more inventive next time, such as the peach and burrata. The half portion we ordered was on the large side.

The portion of braised cauliflower ($14) was painfully small for its price, but the notes of tomato and chili elevated the bland vegetable-of-the-moment. I enjoyed the flavour from the kitchen’s charcoal grill as well.

Its faint smokiness was apparent in other dishes, including the branzino, a European sea bass that’s delicate, flaky and somewhat sweet. Although Joso’s is my fish go-to, Estia now takes second place. The whole fish was cooked rustically and was finished with a splash of olive oil, salt and lemon—just the way it should be. It was filleted and served tableside, which added an interactive experience to our dinner.

The beef short rib ($55), marinated with crushed coriander seed, sesame and mustard was smoked to perfection. It was a bit on the rare side, but oozing with flavour. I wasn’t a fan of the horseradish as I felt like it didn’t fit the Mediterranean theme and was such a predictable combination. Pomegranate would have been a thematic flavour pairing to explore.

When it comes to frites, I’m a connoisseuse. Estia’s fries ($9) were thick-cut and served with chunky feta aioli. Nothing to complain about or rave about. Although I didn’t have any wine with dinner, a few family members were impressed with the extensive selection wines, by the glass or by the bottle, from all corners of the world.

Whether you’re looking for a celebratory meal with friends and family or a date spot with a special someone, Estia is a solid choice. Unlike the Botox Barbies that haunt Yorkville’s hot spots, Estia offers more than just a pretty face. Beneath its swanky shell is a passionate team who is committed to delivering palate-pleasing food and drinks. Estia has all the right ingredients to grow into one of Toronto’s restaurant staples. The question is: will it have to go under the knife again?