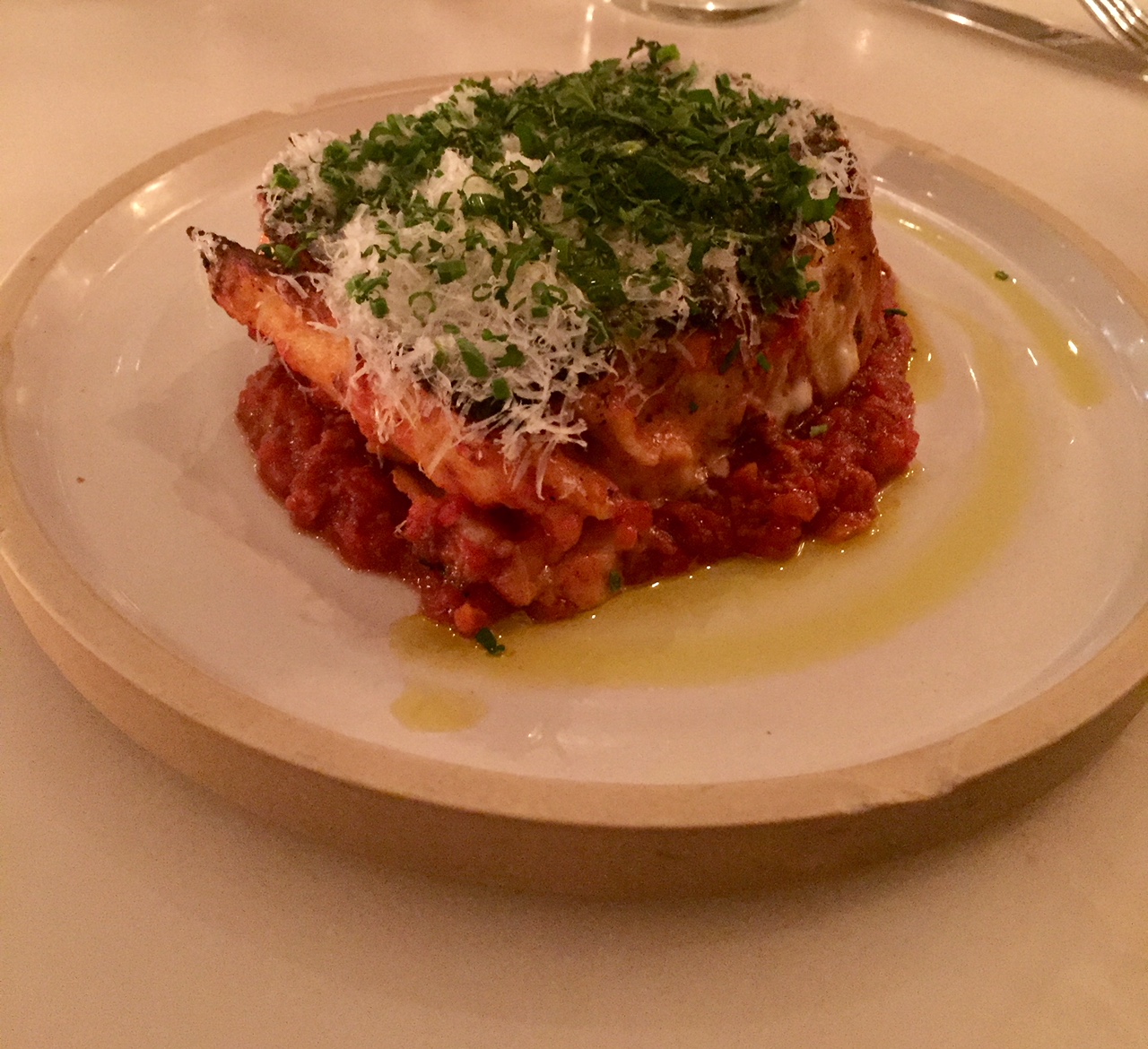 If you’ve been to Campagnolo, you know what Chef Craig Harding and Alexandra Hutchison are capable of—both in cuisine and in ambiance. La Palma, a stone’s throw from Campagnolo, opened in May 2017 and I was curious to see if it was worthy of the hype.

This time around, co-owners and power-couple Harding and Hutchison brought a different concept to life. La Palma is marketed as an all-day spot where people can grab a morning coffee, lunch to go, or enjoy a casual dinner while immersed in the breathtaking space.

I ventured out to DuWu (Dundas West) for dinner with some girlfriends on a Sunday night, eager to test the Instagrammable plates that I’d seen on my feed—particularly the hundred-layer lasagna, thin crust pizzas and roasted cauliflower.

Making its home in a former garage, the space was breezy and expansive with murals on the walls, pastel accents, high ceilings and a Venice Beach feel. Easy breezy summertime was what the space felt like pour moi and gave a nostalgic nod to days of sunshine and picnics in Trinity Bellwoods Park. What stole the show was the copper-accented open kitchen where all the seasonal bounty was being prepared. There were four bar seats with a view of the kitchen, where I would definitely sit, if I returned. Emphasis on the “if.” Pourquoi? Read on, s’il-vous-plaît…

With undeniable beauty everywhere and details for days (including monogrammed plates), I was eager to see if the food would match. We sat down at a table in the dining room and a modelesque server with flawless skin greeted us. Throughout the service, she was pleasant and attentive (and didn’t furrow her Botoxed brow after we told her we weren’t drinking alcohol). Most servers would, so c’est apprécié!

The menu featured pizzas with both traditional and inventive toppings, hearty pastas, roasted vegetables, fish and meat—all were reasonably priced. Despite being immersed in a SoCal vibe, the menu had strong northern Italian influences. We ordered a sampling of dishes to see what all the fuss was about.

The two pizzas arrived on wooden cutting boards. Stretched long and flat like a Beaver Tail instead of wide and round, the crusts were the perfect canvas for the toppings. The more traditional pizza with pomodoro, basil and fior di latte ($14) was très bland. The other, with pancetta, fresh ricotta, rosemary and pickled chili ($16) spoke to my taste buds in a more profound way; however, I wouldn’t go rushing back for the pizza—or the pasta.

The most talked-about dish—the hundred-layer lasagna ($20)—was steeped in tradition. The recipe was handed down from Harding’s nonna, and offered a crusty edge with a lukewarm inside—likely from frying the pre-cooked lasagna before serving it instead of reheating it in a convection oven. Layers upon layers of sheet-like pasta held barely-there bolognese and mozzarella. The overcooked square was finished off with fresh parsley and powdery (I would have liked to see freshly-grated) Parmesan. Call me un peu snobbe, but I turned my nose up at the bland dish. The rigatoni ($19), unfortunately, did not leave a good taste in my mouth either. The two pasta dishes proved that the kitchen doesn’t know the meaning of “al dente.” Desolé, but Nonna wouldn’t approve.

Légumes, anyone? While the endive and castelfranco salad ($14) didn’t look impressive, the hazelnuts, red onion, poppy seeds and pomegranates tied everything together in a unique way. And the dressing was out of this world.

Next up was the grilled Cornish hen. The generous half-portion ($14) of bone-in chicken arrived in a cast iron pan and was covered in a thick layer of piri piri sauce and herbs, giving it a Portuguese feel. Flavouring was on point, including the salt balance. Again, nothing remotely Italian about this dish, but it was satisfying on a cold night. To accompany this, we ordered the roasted cauliflower ($12). A light drizzle of miso bagna cauda sauce complemented the roasted grapes and made for a very rustic dish. If you’ve been to Campagnolo, it was reminiscent of the burrata and roasted grapes. The cauliflower should have been blanched a bit longer before roasting since it was a tad raw. La Palma, taste your cruciferous veggies before plating.

One of my (many) dining pet peeves is how so many new restaurants get wrapped up in chic ambiance instead of nailing the menu. Both are important, but the food should always steal the show. While I loved La Palma’s vibe, there was a major incongruity between the space and the food. Naturally, it’s hard not to compare La Palma to her more refined older brother, Campagnolo. While Campagnolo knows who he is down to the core, La Palma is a lost teenager who needs to stop being so damn superficial and focus more on the substance.

294 Replies to “La Palma – Its beauty overshadowed the food”